Already, La Herradura has a sculpture which aims to be the symbol and image for the town. 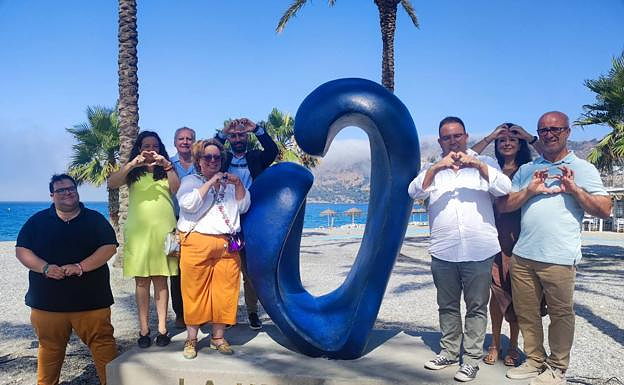 Already, La Herradura has a sculpture which aims to be the symbol and image for the town. The work was done in the workshop of the Moreno Brothers from Granada. It occupies a spot next to the roundabout at La Herradura's entrance. This project has been promoted and promoted through the Municipal Tourist Board of Almunecar – La Herradura by Daniel Barbero, the Deputy Mayor for Tourism and Beaches. In recognition of the services provided by Herradurena's beach, the flags Q for quality, Safe Live... and blue were raised simultaneously.

On Wednesday, July 3, at the gates of Almunecar, after the celebration of last night's election of Juan Jose Ruiz Joya as Almunecar's mayor, the inauguration took place. This heart will serve as a reference point in the new image of neighbor and visitor to La Herradura.

Daniel Barbero welcomed the guests, especially the new Mayor Almunecar, as he was attending the inauguration ceremony of the sculpture. This was the first public act following the election.

The "Heart" of Herradureno measures 180 x 120x 65 cm. This case the technique was that of forged-welded sheet metal. The patina will be created following oil and fire processes to obtain a blue color allegory of waves of the ocean." Daniel Barbero, who congratulated Brothers Morenos on their work.

Miguel Moreno explained his thoughts, accompanied by Jose Maria, his brother. Moreno explained that the idea was to create a sculpture with the same sculptural power as an object, and that would also be inspired by the sentiment "I love La Herradura", but it was different from other hearts we have seen or known. He said that the sculpture should suggest that heart, while at the same time displaying the masculine and feminine concave and converse qualities that are present in our father’s sculpture."

‹ ›
Keywords:
HerraduraInauguraCorazonEscultoricoDifundirLocalidadRedesSociales
Your comment has been forwarded to the administrator for approval.×
Warning! Will constitute a criminal offense, illegal, threatening, offensive, insulting and swearing, derogatory, defamatory, vulgar, pornographic, indecent, personality rights, damaging or similar nature in the nature of all kinds of financial content, legal, criminal and administrative responsibility for the content of the sender member / members are belong.
Related News