L1: Paris SG at ten saves a point in Reims

Small brake, with this second draw in a row, after that at Benfica (1-1), in the Champions League, and this first match without scoring of the season. 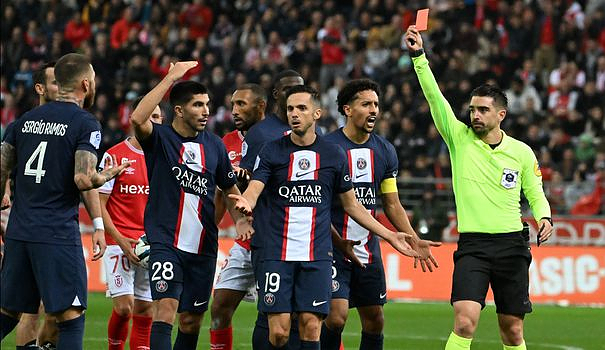 Small brake, with this second draw in a row, after that at Benfica (1-1), in the Champions League, and this first match without scoring of the season.

PSG only half benefited from OM's unexpected faux pas at the Vélodrome against Ajaccio (1-2), taking their lead to three lengths, eight days before the clash between the first two in the championship, for which Sergio Ramos will be therefore suspended.

The match changed for the first time in the 42nd minute after the exclusion of the Spanish central, in two stages, but very quickly. Warned for a dispute, Sergio Ramos obviously added one word too many and Pierre Gaillouste showed him the red.

Marco Verratti, who disputed, also received a yellow. Many Parisians protested, Christophe Galtier raised his palms to the sky, Marquinhos and Danilo went to see the referee in the center circle at the break, and Kylian Mbappé also asked him for an explanation in the hallway.

His team reduced to ten, Galtier released Verratti at the break, quite upset, to replace him with Vitinha (46th).

But the 28th red of the career of the 2010 world champion does not alone explain the bad match of PSG.

The many changes made by Galtier have altered the collective game, which is much less fluid.

Lionel Messi injured, he who had played his very first Ligue 1 match in Reims last year, and Neymar on the bench, only Kylian Mbappé, recovered from his angina, represented the "MNM" at kick-off.

The unprecedented attacking trio worked less well, with "Kyky" at the forefront, and in support Pablo Sarabia and Carlos Soler, for whom it was the first tenure.

On their best move, Soler launched Mbappé towards the duel, but Yehvann Diouf brilliantly won it in a Manuel Neuer outing, with the chest (33rd).

Other than that glow, he had trouble getting into the system, Soler. In his defense, the last recruit of the summer had only eleven minutes and a little extra time in three matches.

He did not exceed the hour mark, replaced by Neymar (57th).

The Brazilian did not change the course of the match, hitting wide on a good serve from Mbappé (67th).

"Ney" was also nervous, as in his bad days, with an altercation with Azor Matusiwa (71st), on whom he then managed a small punitive bridge (73rd). He was warned at the end of the match for a shoulder blow (90th 2).

In addition to Sergio Ramos, other Parisians have gone through. His central hinge partner Danilo made some unusual mistakes.

After a bad recovery (12th), the Portuguese, scorer against his camp at Benfica, missed a clearance which benefited Marshall Munetsi. Fortunately for Danilo and PSG Gianluigi Donnarumma, in great shape, on the other hand, lay down perfectly to take out the shot from the Zimbabwean who hit home (35th).

Danilo managed a much better second half, with an important save in front of Flips (69th) and authoritative climbs. He avoided the worst at PSG, a first defeat this season.

Stade de Reims failed to take advantage of their numerical advantage, almost never reaching Donnarumma. On one of the rare strikes that the Parisian defense did not counter before, the Italian goalkeeper won ahead of Arbër Zeneli (52nd).

The match ended with the beginnings of fights where Achraf Hakimi, Andreaw Gravillon (90th), Neymar and Mbappé (90th 3) were warned, betraying the nervousness of the Parisians.