In a club that has been looking for itself for three years and is about to be sold to American businessman John Textor, the new underperformance against Toulouse (1-1) Friday in Ligue 1, after four defeats in a row , sounded the death knell for Bosz, with too starving results. 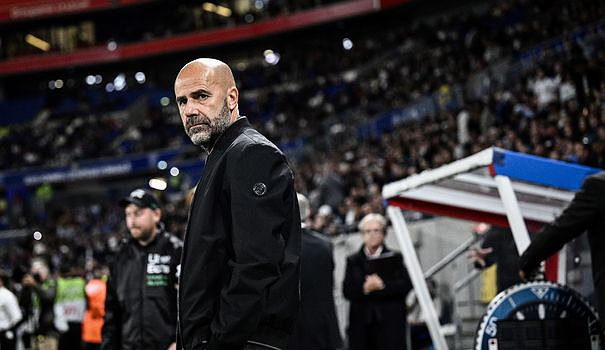 In a club that has been looking for itself for three years and is about to be sold to American businessman John Textor, the new underperformance against Toulouse (1-1) Friday in Ligue 1, after four defeats in a row , sounded the death knell for Bosz, with too starving results.

"Given the disappointing results obtained during the start of the season, which remain well below expectations and the objectives set, Olympique Lyonnais informs of the layoff on a protective basis of Peter Bosz", wrote OL in a press release.

"After having exchanged in the night from Saturday to Sunday with John Textor, Olympique Lyonnais informs that it has taken the decision to appoint, as head coach of the professional team, Laurent Blanc for two seasons, i.e. until the 30 June 2024," the club added.

OL are only 9th in L1 (14 pts) after ten days, far from their podium goal, before going to challenge Rennes next Sunday.

Blanc, 56, has not coached in L1 since leaving PSG in 2016. The 1998 world champion had been free of any contract since his dismissal by Qatari club Al-Rayyan in February.

The former French international defender (97 caps), who wore the jersey of Naples, Marseille, Barcelona and Manchester United, had already been mentioned to succeed Sylvinho in October 2019, before the choice of President Jean-Michel Aulas was is about Rudi Garcia (2019-2021).

In just six seasons as L1 coach, three in Bordeaux and as many at Paris SG, the "President" has forged an impressive record, including four French championship titles, including three in the capital.

But Blanc, who will be accompanied in Lyon by his deputy Franck Passi, ephemeral coach of Marseille, has a lot to prove: he has not occupied a leading team bench since 2016.

The former coach of the Blues will also have to navigate in the microcosm of OL, where others before him, Bruno Genesio, Garcia or Bosz, have worn themselves out, facing the supporters or even facing the leaders.

In just over a year in office, Bosz (58) has never managed to develop the polished game promised on his arrival, ending in a disappointing 8th place in L1 in May 2022, without European qualification, and stagnating in mid-table after 10 rounds this season. Only clearing: a quarter-final of the Europa League last spring, lost against West Ham (1-1, 0-3).

The break seemed consummated between the former technician of Ajax Amsterdam and Bayer Leverkusen and his workforce: captain and striker Alexandre Lacazette had publicly questioned Bosz's tactical choices on Friday evening.

In a club that has only known thirty coaches in 72 years, the Dutchman's successor will be the fourth to settle on the OL bench since 2019 and the departure of Bruno Genesio.

In recent years, the passage of the Brazilian Juninho, former icon of the club, as sports director (June 2019-December 2020), has generally proven to be a failure, a symbol of the lack of coherence of Lyon's sports policy.

The groups of supporters had never dubbed Genesio and did not have much empathy for Rudi Garcia, semi-finalist of the Champions League (2020), either.

It is in this negative context, and with a team in search of benchmarks, that Blanc arrives, with the objective of bringing one of the strongholds of French football back to the top.

"The entire professional group with the confidence of the board of directors, supported by the groups of supporters and the entire OL family, will have the sole objective, at the heart of this very difficult period, of repositioning the club at the highest French level. and to return to the European Cup next season," concluded OL.