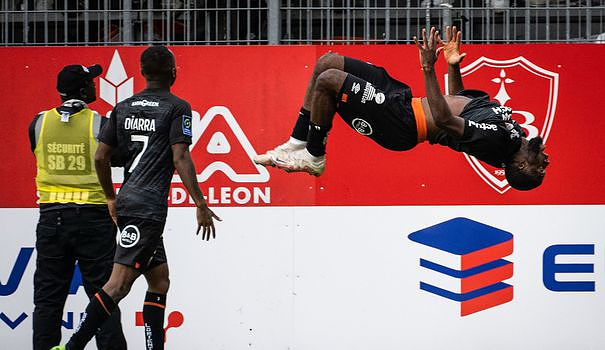 Who will stop FC Lorient? The team of Régis Le Bris chained Sunday afternoon a sixth consecutive victory in L1, this time against its neighbor Brest, with a double from Terem Moffi (24th, 53rd).

However, it was Brest striker Romain Del Castillo who opened the scoring (17th) but Moffi, untenable, equalized at a tight angle with the help of the post before doubling the lead opportunistically.

Either his 7th and 8th goals this season in L1, which allows him to join Parisian stars Kylian Mbappé and Neymar (8 goals) at the top of the scoring charts.

Lorient also benefits: here are the second Merlus (25 pts), only one length behind the leader PSG, slowed down on Saturday in Reims (0-0), and two points ahead of Marseille (3rd, 23 pts), who conceded their first defeat in this Ligue 1 against Ajaccio (2-1).

It's a great reward for FC Lorient and it's a new disappointment for Stade Brestois, now bottom of L1 (6 pts). And while one of the corners of the Francis Le Blé stadium was closed for disciplinary reasons, a clash between Brest and Lorient supporters took place Sunday morning in the city center of Brest, a clash which caused a slight injury, according to a source. policewoman.

AS Monaco at cruising speed: the team from the Principality chained a fifth victory in a row in Ligue 1 on Sunday in Montpellier (2-0) thanks to Breel Embolo (45th 1) and Myron Boadu (80th), at the end of a rather controlled match.

The Monegasques, who continue their recovery, are fifth (20 pts), six lengths from the leader.

A great collective force begins to emanate from the team of Philippe Clement, convincing Thursday in the Europa League against Trabzonspor (3-1) and still very realistic Sunday at midday at the Mosson stadium.

Next opponent for the Monegasques in L1: the surprising Clermont team, which tamed Auxerre 2-1 thanks to Saîf-Eddine Khaoui (55th) and Grejohn Kyei (58th) and now has 16 points, a nice total in its quest to maintain .

A breath of fresh air for Nice coach Lucien Favre: OGC Nice regained their colors with a 3-2 victory against Troyes, the Aiglons' third success in this Ligue 1, which puts them back in the middle of the table and gives them a little of air.

At the Allianz-Riviera, the people of Nice did the main thing with an early goal from Italian defender Mattia Viti with a header (2nd) then a penalty obtained by Nicolas Pépé and converted by Andy Delort (37th) during his 31st birthday. Then Pépé increased the score all in power (50th)... before Nice put themselves in danger at the end of the match with two Trojan goals signed Xavier Chavalerin (82nd) ​​and Abdu Conté (90th).

Anyway, the Niçois are thirteenth (11 pts), just ahead of Strasbourg (14th, 8 pts), who finally won this season after nine days without a win!

Racing won 3-2 in Angers thanks to Kevin Gameiro (7th), Miha Blazic against his side (33rd) and Habib Diallo (58th), while Adrien Hunou (11th) and Blazic (87th) maintained in vain the Angevin hope.