For his part, Russian President Vladimir Putin denounced a "despicable crime" after the death of the daughter of an ideologue supporting the offensive in Ukraine in the explosion of his car near Moscow, which the Russian authorities attribute to kyiv . 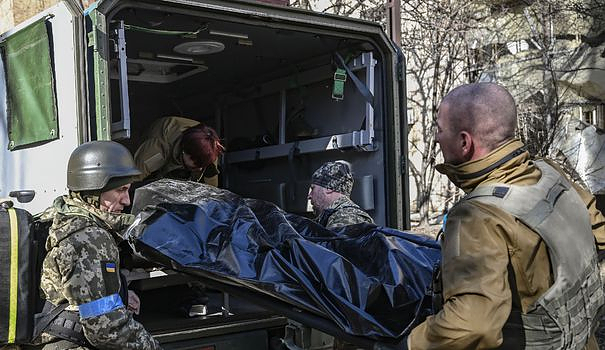 For his part, Russian President Vladimir Putin denounced a "despicable crime" after the death of the daughter of an ideologue supporting the offensive in Ukraine in the explosion of his car near Moscow, which the Russian authorities attribute to kyiv .

Speaking at a forum in kyiv, the commander-in-chief of the Ukrainian army, General Valery Zaluzhny, told him that Ukrainian children needed special attention because their fathers had gone to the front and "were probably among nearly 9,000 heroes who had been killed".

This is one of the rare declarations of Ukrainian officials about military losses in kyiv in this war, launched on February 24 by Moscow and which put Ukraine on fire and blood.

The previous estimate dates from mid-April, when Ukrainian President Volodymyr Zelensky mentioned the figure of 3,000 Ukrainian soldiers killed and around 10,000 wounded since the start of the Russian offensive.

While many European countries are supplying military equipment to Ukraine, the EU plans to organize a "training and assistance" mission to the Ukrainian army which would take place in neighboring countries, said on Monday the High Representative of the EU for Foreign Policy, Josep Borrell.

The proposal will be discussed next week in Prague at the Council of Defense Ministers of EU member countries.

"A war that lasts and looks like it will last requires an effort not only in terms of supplying equipment, but also training and helping to organize the army," Borrell commented during an interview. a press conference in Spain.

"We are facing a large-scale war", "a conventional war" with "extraordinarily large means and hundreds of thousands of soldiers", he explained.

"Ten million Ukrainians have left their country, it's as if 20% of Spaniards had left Spain", insisted the High Representative of the EU, of Spanish nationality.

"We are at a time when the front is stabilizing. Even if the Russian army continues to attempt (limited) offensives, we see a loss of momentum; Moscow is in a defensive position on a large part of the front and part of its rear in Ukraine," Dimitri Minic, a researcher at the Russia/NIS Center at the French Institute for International Relations (IFRI), told AFP.

Two United Kingdom-based American B-52 Stratofortress bombers flew low over several countries in south-eastern Europe on Monday, a new show of force to underline the "commitment" of the United States alongside the members of NATO against the background of the war in Ukraine, announced the American command.

On the ground in Ukraine, the Russian Defense Ministry said on Monday that its troops had killed up to 100 Ukrainian soldiers in three different localities in the Donetsk region, 30 in the Zaporozhye region, as well as 50 in the region of Mykolaiv, in eastern Ukraine.

Dozens of Ukrainian armored vehicles were destroyed there, along with eight command posts, a Buk-M1 anti-aircraft missile system launcher and six weapons and ammunition depots for rockets and artillery, according to the ministry.

The Russian security services (FSB) on Monday accused the Ukrainian "special services" of having killed the daughter of a reputed ideologist close to the Kremlin, who died on Saturday evening in the explosion of his car near Moscow.

According to an FSB statement cited by Russian news agencies, the car driven by Daria Duguina was trapped by a woman of Ukrainian nationality born in 1979, who arrived in Russia in July with her minor daughter. This Ukrainian woman then fled to Estonia with her daughter.

"A despicable, cruel crime brought a premature end to the life of Daria Duguina, a brilliant and talented person with a truly Russian heart," Putin said in a message of condolence to relatives of the slain young woman. Saturday.

Journalist and political scientist born in 1992, Daria Douguina was the daughter of Alexandre Douguine, an ultranationalist ideologist and writer promoting an expansionist doctrine and fierce supporter of the Russian offensive in Ukraine.

Questioned on Saturday by Russian media believing that the target of the attack was in fact Alexander Dougin, Ukraine had denied Sunday any involvement in the death of Dougina.

“Ukraine certainly has nothing to do with the explosion (on Saturday), because we are not a criminal state,” said an adviser to the Ukrainian presidency, Mikhaïlo Podoliak.