Two days of intensive searching by the kyiv authorities has ended their hope of finding survivors among the rubble of the destroyed shopping center in Kremenchuk in southeast Ukraine. 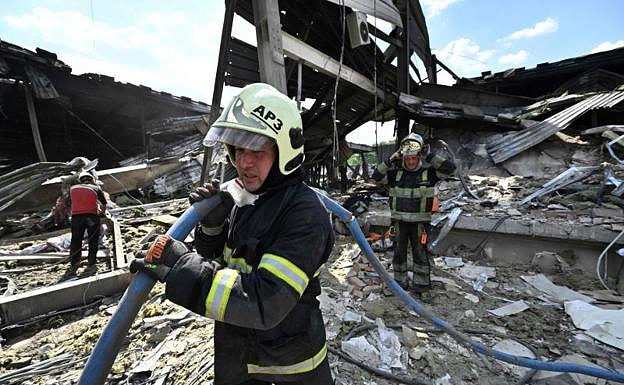 Two days of intensive searching by the kyiv authorities has ended their hope of finding survivors among the rubble of the destroyed shopping center in Kremenchuk in southeast Ukraine. According to Denis Monastirski (Minister of Interior), the total number of victims has reached 20 and 59 respectively. Kirilo Tymoshenko, deputy director of Presidency, said that more than 40 missing persons reports had been filed.

Sources from the Ukrainian Ministry of the Interior, quoted by the "Kyev Independent" media, state that survivors are unlikely to be found under the rubble, despite the efforts of the nearly 4,500 rescue team members. Clearing and searching for victims trapped or bodies.

The scale of the attack is one of the biggest obstacles to identifying those who have disappeared. Monastirski noted that most of the bodies of the victims of the attack on the Amstor shopping centre have yet to be identified, as they are almost completely charred. According to Ukrainian authorities, another missile hit the Kredmash machine factory, destroying all its facilities. The director of the Kredmash machinery factory assures that no military vehicles were manufactured there since 1989. Only automobiles for civil purposes are allowed.

Volodymyr Zelensky (the president of Ukraine) stated Monday via Telegram that there were over a thousand people inside the shopping center at the time of the blast, as shown by numerous images shared by social media. social media and media outlets, including his own. He described the incident as "one of most daring terrorist acts in European History."

The Russian Defense Ministry stated in a Tuesday statement that the missile attack on Kremenchuk was intended to destroy "hangars", which were ammunition from the United States and European countries, destined for the group. in Donbass. According to Kremlin, the shopping center was not in operation and caught fire accidentally.

While the Kremenchuk massacre is still being investigated, war in the rest of Ukraine continues. The Ukrainian General Staff recognized the loss of the Lugansk area, which is located in the Donbass.

Officials from the Kremlin have claimed that they have taken Ihor Kolykhayev to prison for refusing to cooperate with the occupants and follow the orders of Moscow. Kherson is a port city at the Black Sea and is located in the northwest corner of the Crimean peninsula. It was occupied by the British during the war's first bars.

The Kherson City Council posted a Facebook post in which it spoke of "kidnapping" as well as denouncing that the Russian forces had taken the alderman handcuffed. Kolykhayev won the municipal election of 2020. In the 2019 elections, he was elected to the Ukrainian parliament as a deputy. Russian forces have detained him as the third mayor in a Ukrainian city. Similar events occurred in March with Melitopol and Dniprorudne in the south.

All members of the international community have condemned what took place in Kremenchuk. "This is another in a string of heinous acts by Russian forces against civilian infrastructure. Josep Borrell, the EU High Representative for External Policy, stated that the continuous bombing of civilians was "reprehensible, completely unacceptable, and constitutes war crime." Charles Michel, President of the European Council, stated that Russia's intimidation efforts "will not succeed" during the G7 meeting. He also described the attack as "horrendous, indiscriminate".

In a joint declaration, the G7 leaders have called the Kremenchuk massacre a "war crime" and announced that they will increase sanctions against Moscow. The UN joins the chorus of condemnation against Russia. Stephane Dujarric (spokesman for Secretary General of United Nations) has called the "new wave of air attacks and bombings" that Ukraine has suffered "deplorable". Another missile attack inflicted several casualties and killed one person in Kiev's capital city.

Russia seems to have no intention of stopping the carnage. Peskov reiterated that Ukraine can end the conflict in the same day, answering a question regarding when it will end. It is sufficient that both the Ukrainian military and the nationalist units surrender to be ordered to give up their arms. "The conditions that Russia has set would then be applied," which, according the Moscow negotiators, includes the recognition and capitulation of Crimea and Donbass as independent entities and the recognition of Donbass as Russian. Ukraine will likely lose Kherson and a lot of Zaporizhia. The presidential spokesperson added, "Then all would end in one hour."

‹ ›
Keywords:
AtaqueRusoCentroComercialKremenchukCobradoMuertos
Your comment has been forwarded to the administrator for approval.×
Warning! Will constitute a criminal offense, illegal, threatening, offensive, insulting and swearing, derogatory, defamatory, vulgar, pornographic, indecent, personality rights, damaging or similar nature in the nature of all kinds of financial content, legal, criminal and administrative responsibility for the content of the sender member / members are belong.
Related News