"Our soldiers are advancing on the front lines in the south in several areas ranging from two to several tens of kilometers," spokeswoman for the military command of southern Ukraine, Natalia Goumenyuk, told local media. 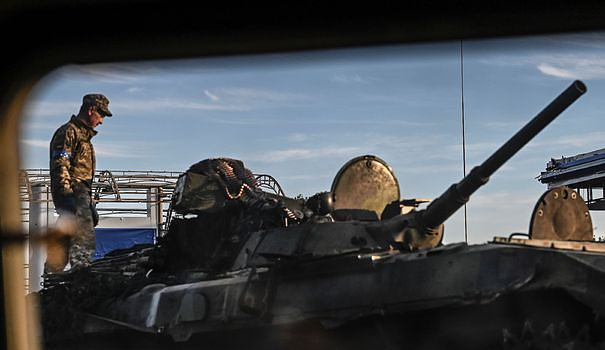 "Our soldiers are advancing on the front lines in the south in several areas ranging from two to several tens of kilometers," spokeswoman for the military command of southern Ukraine, Natalia Goumenyuk, told local media.

In the east, Ukraine claims to have regained control of the city of Kupyansk, which lies on supply routes for the Russian army.

This new victory for kyiv in the Kharkiv region could significantly affect Russia's ability to supply and provide effective logistical support to its positions on the eastern front.

The day before, Ukrainian President Volodymyr Zelensky announced that kyiv forces had retaken 30 localities from Russian troops in this border region of Russia, in northeastern Ukraine.

"Kupyansk is Ukraine," a regional official wrote on social media, posting a photo of Ukrainian soldiers in the city of 27,000.

The Ukrainian special forces have also released images showing their officers "in Kupiansk, which has been and will always be Ukrainian".

"Sending arms to Ukraine is crucial. Defeating Russia on the battlefield means winning peace in Ukraine," he added.

German Foreign Minister Annalena Baerbock has meanwhile arrived in kyiv for a surprise visit in support of Ukraine.

Russia announced on Friday that it had sent reinforcements to the Kharkiv region. Russian state media broadcast footage showing columns of armor, howitzers and support vehicles rolling on unpassable roads.

The largest city recaptured by kyiv forces so far is Balaklya, whose pre-war population was estimated at 30,000.

In the village of Grakové near Kharkiv, taken over by Ukrainian forces, AFP journalists saw destruction testifying to the violence of the fighting, electricity pylons downed and cables spread on the ground.

Stray cats and dogs wandered in search of food in the empty dwellings.

"It was scary, there were shelling and explosions everywhere," 61-year-old Anatoly Vasilyev told AFP of the battle in which Ukrainian forces recaptured the village of Grakove from the Russians.

The bodies of two civilians, with signs of torture and bullet holes in the back of the head, were discovered there, the attorney general's office announced on Saturday, which opened an investigation and forensic examination of the bodies. .

According to this source, after the recapture of the locality by Ukrainian forces, a resident of Grakové surrendered to the police, assuring that Russian soldiers had forced him to bury the two men.

The visit of the German minister to kyiv is her second in the Ukrainian capital since the invasion of Ukraine by Russian forces. It comes a week after the visit to Berlin of Ukrainian Prime Minister Denys Shmygal who again asked for arms to be sent to his country.

"I traveled to Kyiv today to show that they can continue to rely on us. That we will continue to support Ukraine for as long as it takes, with the delivery of weapons, with humanitarian support and financial", assured Ms. Baerbock, quoted in a press release from her services.

In recent weeks, Germany has delivered to Ukraine howitzers, rocket launchers and anti-aircraft missiles, which are part of the military arsenal provided by the West that experts say helped to affect the capabilities of Russian forces.

The visit of the German minister comes after a trip by US Secretary of State Antony Blinken who promised new military aid of 2.8 billion dollars.

During a meeting in Brussels with NATO Secretary General Jens Stoltenberg, Mr Blinken said Russia's sending of reinforcements showed it was paying "a huge price" in its bid to seize the Ukrainian territory.

Russian forces for their part caused severe destruction during the bombardment of Kharkiv and in the industrial region of Donbass to the east.

Pavlo Kirilenko, governor of the Donetsk region in the Donbass, reported two deaths in the Russian strikes.