"The liberation of localities from Russian invaders continues in the Kharkiv and Donetsk regions" (east), the Ukrainian army said. 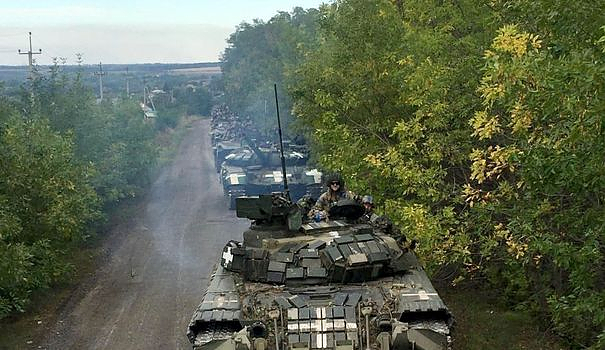 "The liberation of localities from Russian invaders continues in the Kharkiv and Donetsk regions" (east), the Ukrainian army said.

Along the entire front line, her forces "succeeded in driving out the enemy from more than 20 localities" in 24 hours, she added, assuring that "the Russian troops are hastily abandoning their positions and run away".

On Sunday evening, Ukrainian President Volodymyr Zelensky had already announced that Izioum (east) had been "liberated" as part of this counter-offensive carried out for several days.

The loss of this strategic city could seriously counter Moscow's military ambitions in eastern Ukraine, according to military experts.

This breakthrough revives Kyiv's hopes of a decisive reversal of the situation after a long period when the front appeared frozen.

Pro-Russian occupation authorities in the Kharkiv region said on Monday they had moved to Russia's Belgorod region near the border, ostensibly to help deal with an influx of refugees, according to Russian agencies.

But on Monday, Moscow, after acknowledging that it had lost ground, resumed an offensive tone to announce the bombardment of areas regained by Ukraine in the Kharkiv region, in the Kupiansk and Izium sectors.

And the Russian offensive launched last February will continue "until the objectives are achieved", hammered the Kremlin.

There is currently "no prospect of negotiations" between Moscow and kyiv, added Russian presidential spokesman Dmitry Peskov.

Ukraine claims to have taken back around 3,000 square kilometers of its territory, mainly in the Kharkiv region, since the beginning of September.

The Ukrainian army first announced a counter-offensive in the south, before making a lightning advance in the Kharkiv region over the past week.

In the south, in the Kherson region, "the occupiers have also withdrawn from their positions in several localities", the Ukrainian army also announced on Sunday.

Several regions in the east, north, south and center of the country also suffered extensive power cuts on Sunday evening, attributed by kyiv to Russian strikes. Near Kharkiv, the thermal power plant number 5, the second in the country, was affected, according to the presidency.

Power was, however, quickly restored to some of the affected areas. In that of Kharkiv, "80%" of the electricity and water supply has been restored, said Monday morning a deputy head of the presidency Kyrylo Tymoshenko on Telegram.

Ukrainian Foreign Ministry spokesman Oleg Nikolenko called the attacks "an act of desperation" by Russian forces in the face of their setbacks.

In Geneva, the Office of the United Nations High Commissioner for Human Rights raised its voice on Monday towards Russian power, accused of "intimidation" and "censorship" of opponents of the war in Russia.

"Intimidation, restrictive measures and sanctions against people expressing their opposition to the war in Ukraine undermine the exercise of fundamental freedoms guaranteed by the Russian Constitution", declared the Acting High Commissioner, Nada Al- Nashif, during his opening speech at the 51st session of the Human Rights Council.

She particularly deplored "the pressure exerted on journalists, the blocking of resources available on the internet and other forms of censorship".

The war in Ukraine will be discussed several times during the Council session, which meets for a month.

The situation also remains worrying at the Ukrainian nuclear power plant in Zaporijjia (south), where all the reactors have now been shut down.

In a telephone interview on Sunday with his French counterpart Emmanuel Macron, Russian President Vladimir Putin warned of the "catastrophic consequences" that "regular Ukrainian attacks" could have on this complex, "including the deposit of radioactive waste".

Mr. Macron replied that "the Russian occupation" was "the cause of the risks" weighing on the largest nuclear power plant in Europe, and demanded that Russia withdraw all its weapons.

Economically, the repercussions of the conflict in Ukraine - inflation, lack of gas, etc. - should contribute to a "winter recession" in Germany, and a 0.3% decline in the country's gross domestic product (GDP). Germany expected in 2023, according to a study by the IFO institute.

The UN also called on the European Union on Monday to avoid turning to fossil fuels in the face of the energy crisis created by the Russian invasion of Ukraine, deploring any "backtracking" contrary to climate interests.