Koshu, the rise of a wine with a Japanese soul

Under low, stormy skies, Keiya Uchida inspects bunches of gray-pink grapes at his small vineyard in Yamanashi Prefecture, the birthplace of viticulture in Japan. 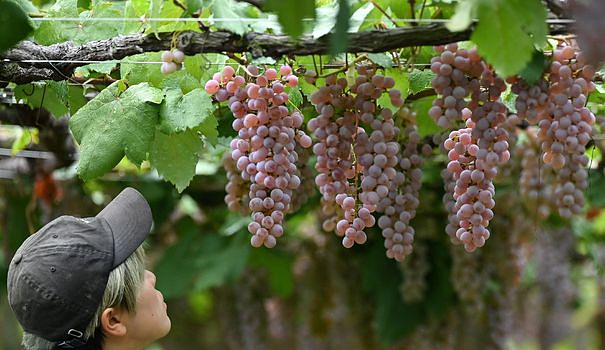 Under low, stormy skies, Keiya Uchida inspects bunches of gray-pink grapes at his small vineyard in Yamanashi Prefecture, the birthplace of viticulture in Japan.

It is here that the koshu is produced, a dry and light white wine, characteristic of the local terroir and its history, produced almost exclusively in Japan and which goes well with the delicate gastronomy of the vintage.

In this fertile basin, about a hundred kilometers west of Tokyo, surrounded by high mountains including the majestic Mount Fuji, the vines are mainly grown in pergolas, at around 1.70 m in height.

"This reduces its exposure to humidity in the ground and makes the grapes dry better in the wind", explains to AFP Mr. Uchida, 28, who runs L'Orient Shirayuri Winery with his parents, a winery founded by his great-grandfather in 1938.

In the small Yamanashi vineyards that look like hanging gardens, often embedded in urban areas for lack of space, the grapes are generally topped with tiny oilcloth "umbrellas", a defense against excessive rainfall.

"Foreign visitors find it a bit crazy" when they see this enormous work, laughs Mr. Uchida, who studied viticulture and oenology in Burgundy.

But it is "indispensable" because bad weather and high humidity "make the grapes fragile and prone to disease".

Like many of Yamanashi's more than 90 wine producers, L'Orient Shirayuri Winery emphasizes koshu.

When its production started in Yamanashi in the 1870s, the first Japanese winegrowers, trained in France, were naturally interested in this grape, which has been cultivated for centuries in the region and is resistant to many diseases thanks to its thick gray-pink skin.

But the results were mediocre for a long time. Twenty years ago, people said "it had no taste, no flavor, no color", recalls Takayuki Tamura, the head winemaker of Château Mercian in Yamanashi, one of the main local estates and owned by Japanese beverage giant Kirin.

The turning point, according to him, was the discovery in 2003 of citrus notes during fermentation tests of koshu by a Franco-Japanese team from the University of Bordeaux.

This "led to rethinking the methods of growing and winemaking" koshu to express those flavors, Tamura says.

Since 2018, a national label has made it possible to better distinguish authentic "Japanese wines" from other wines produced in the country but using imported ingredients.

These Japanese wines, relatively expensive (between 10 and 20 euros on average per bottle purchased in Japan), represent only 5% of the wine market in volume in the archipelago, two thirds of which are imported, especially from France, Chile and from Italy.

But thanks to their growing quality, their market share "could reach 10% within 5-6 years", bets Mitsuhiro Anzo, general manager of Château Mercian and president of the Yamanashi winegrowers' association.

As for Japanese wine exports, they remain tiny: 687 million yen in 2021, according to the National Tax Agency (five million euros), against 300 million euros for sake, the famous rice alcohol Japanese, and even more so for Japanese whisky.

"The price is a big obstacle" and the obstacles posed by the climate and the limited agricultural land will mean that Japan will never produce large volumes of wine, says Frédéric Cayuela, French teacher at the Wine Academy in Tokyo.

But Japan "has a card to play" for export in a niche niche, focusing on the strong "identity" of its terroir and the successful connection of its wines with Japanese gastronomy and fusion cuisine, believes this expert.

Mr. Anzo is on the same wavelength: "20 years ago, we only tried to imitate foreign wines. But now, we have very specific grape varieties, such as koshu (...) A lot of consumers who live overseas are interested in Japanese culture and cuisine, so that's a good thing for Japanese wines."