Kokoschka, an early “punk” painter, exhibits in style in Paris

Nearly 40 years after the only real French retrospective devoted to him at the Musée des Beaux-Arts in Bordeaux, the Musée d'art moderne de la ville de Paris (MAM) presents 70 years of creation by this "enfant terrible" by the intellectual and artistic Vienna of the turn of the 20th century, that of Gustav Klimt, Egon Schiele, Adolf Loos or Karl Kraus. 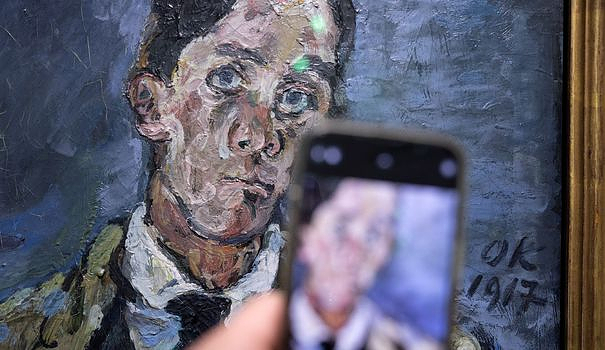 Nearly 40 years after the only real French retrospective devoted to him at the Musée des Beaux-Arts in Bordeaux, the Musée d'art moderne de la ville de Paris (MAM) presents 70 years of creation by this "enfant terrible" by the intellectual and artistic Vienna of the turn of the 20th century, that of Gustav Klimt, Egon Schiele, Adolf Loos or Karl Kraus.

These are 150 works including 75 major paintings, drawings, lithographs, posters, rare documents and photographs.

"With the ambition to discover the whole of the work" of the one who was also a poet, writer or playwright, and "the incredible richness of his career which crossed the 20th century", told AFP Fanny Schulmann, curator of the exhibition with the Austrians Dieter Buchhart and Anna Karina Hofbauer.

Portraits, landscapes, political allegories, animals... With brush strokes, flat tints, colors and lively lines in perpetual mutation, which made him a pioneer of expressionism, Kokoschka (1886-1980) represents states of mind in a radical way and shatters all the conventions of the great masters of art history whom he admires, "defending, against abstraction, a humanist idea of ​​the human being", emphasizes Didier Buchhart.

"The human is a radiance, it is not the surface, the uniformity in the world. I can only paint a city when it is organic, I could see the human being under his skin. Alone a painter can do that, that's why I am in permanent rebellion", said Kokoschka in 1964. He was 78 years old.

Born in Pöchlarn, Lower Austria, in a modest background, he studied art and lived in Vienna, but also in Dresden, Berlin, Prague, Paris and London, where he went into exile in 1938, engaging against the rise of fascism in Europe and Nazi power, traveling through North Africa and the Middle East, a journey presented chronologically.

From 1908, he caused a scandal. His "Boys who dream", an illustrated poem on the awakening to sexuality, revolts the Viennese bourgeoisie. Rejected, "he shaves his head and represents himself as a convict," says Ms. Schulmann.

He did it again immediately afterwards with a play, "Meurtrier, espoir des femmes", which evokes the weight of this bourgeois, Catholic society on human relations and between the sexes.

It is "the wildest of all" ("Oberwidling" in German), will say the critics at the time. His "Tigron" (1926), half-tiger half-lion, devouring a gazelle, presented at the MAM, is a perfect illustration of this. Just like the subtitle of the exhibition: "A beast in Vienna".

After breaking up with Alma Mahler (the widow of Gustav Mahler) and while recovering in Dresden from serious wounds on the Russian and Italian fronts during the First World War, he had a doll made with the image of the young woman by a theater costume designer. Several photos exhibited in Paris and coming from the Kokoschka research center in Vienna show her, wide-eyed, long black hair and a body sewn in white fur.

“He takes her everywhere and paints himself in her company, which has a performative value at the time, very modern,” explains Ms. Schulmann. Kokoschka will abandon the doll, "decapitated, following a very drunken night of celebration which completes her staging of violence", she adds.

"He has a punk side in the sense that he liked to provoke, to push people to their limits against any reassuring representation of the world, with the dimension of a free man who did not allow himself to be confined to any movement, any era, and knew how to reinvent itself all the time. But its works are also a tribute to great painting, a complexity filled with paradoxes", she analyzes.

Posters condemning the bombing of Guernica, participation in anti-fascist groups and the Congress for Peace... Kokoschka, who died at almost 94 years old in Switzerland, always defended freedom and a common European culture.

When in 1937 the Nazis exhibited his works which they considered "degenerate", he replied with a self-portrait: "Degenerate artist" (exhibited in Paris), arms crossed and eyes defying the regime.