Kim rewarded with a massive series of promotions the military and scientists involved in the development of the new Hwasong-17, dubbed the "monster missile" by military analysts, capable of reaching the continental United States. 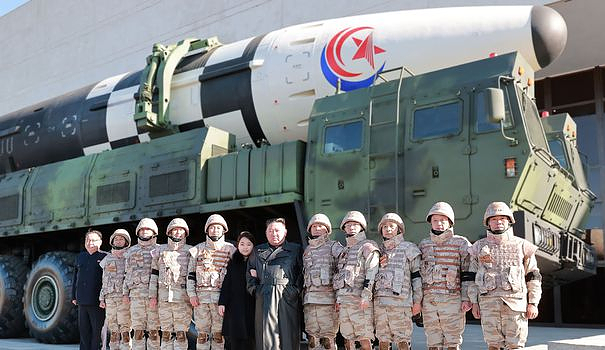 Kim rewarded with a massive series of promotions the military and scientists involved in the development of the new Hwasong-17, dubbed the "monster missile" by military analysts, capable of reaching the continental United States. This intercontinental ballistic missile (ICBM) was tested on November 18, falling in waters off Japan.

The Hwasong-17 is "the strongest strategic weapon in the world" and constitutes "a magnificent leap forward in the development of technology to mount nuclear warheads on ballistic missiles", the leader enthused, quoted Sunday by the official North Korean agency KCNA.

The scientists, soldiers and managers of this program have contributed to the "goal of building the strongest army in the world", he further welcomed.

The leader stressed in his order rewarding participants in the armament program that the purpose of developing a nuclear force was to "reliably protect the dignity and sovereignty of the state and the people."

It is "the greatest and most important revolutionary cause, and its ultimate goal is to possess the most powerful strategic force in the world, the absolute force unprecedented in the century," he proclaimed.

The official Rodong Simun daily published, also on Sunday, more than a dozen photos showing Kim Jong Un posing in the company of hundreds of civilians and soldiers during the ceremony, accompanied by "his beloved daughter". The existence of the latter was first revealed last week, when North Korean media published photos of her assisting with her father, hand in hand, at the launch of the Hwasong-17.

Photos from Sunday show the teenager, believed to be Kim Jong Un's second child and named Ju Ae, dressed in a black coat, arm in arm with her father. Some of the images show the father and daughter posing together in front of the missile in the company of military personnel in uniform.

In addition to promotions for participants in the weapons program, the regime bestowed the distinction of "Hero of the Democratic People's Republic of Korea" (DPRK, the official name of North Korea) to the vehicle that launched the missile on 18 November, KCNA added in another dispatch.

The launch "clearly proved to the world that the DPRK is a full-fledged nuclear power," the official agency said.

This round of self-congratulations by the regime comes as tensions are at their height on the Korean peninsula, after a record series of missile tests by Pyongyang and as Seoul, Washington and Tokyo have strengthened their military cooperation and joint maneuvers in the region.

North Korea proclaimed in September that its status as a nuclear power was "irreversible", definitively closing the door to any negotiations on its disarmament. She then threatened the United States with nuclear response in the event of an attack.

Seoul and Washington also expect that Pyongyang will soon carry out a nuclear test, which would be the seventh in its history and the first in five years.