Kazakhstan: President Tokayev re-elected without competition after a dark year

According to the preliminary results published Monday by the Electoral Commission, this 69-year-old man who came to power in 2019 obtained 81. 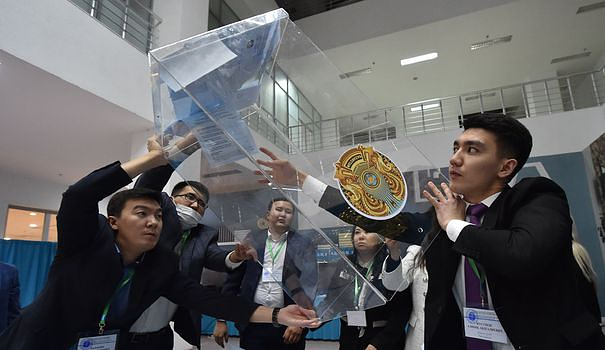 According to the preliminary results published Monday by the Electoral Commission, this 69-year-old man who came to power in 2019 obtained 81.31% of the vote and the participation amounted to 69.44% in the ballot on Sunday.

As expected, his five opponents made up the numbers, none of them exceeding 3.42%. The vote "against all", a novelty of this election, won over 5.8% of voters, coming in second place.

International observers from the Organization for Security and Cooperation in Europe (OSCE) on Monday regretted the "lack of real competition" during the campaign, calling on the government to "reform".

Located at the crossroads of important trade routes and rich in natural resources, Kazakhstan descended into chaos in January when protests against high prices escalated into riots, only to be brutally put down. Balance sheet: 238 dead.

The country remains traumatized by this crisis and, a sign that tensions persist, the authorities announced a few days before the election that they had arrested seven supporters of an opponent in exile, accused of fomenting a "coup d'etat".

Overnight Sunday to Monday, Mr. Tokayev, who had obtained nearly 71% of the vote in 2019, called for "unity" to carry out the program of constitutional reform in June.

"This election opens a new era and all the main institutions of power will be reformed," he promised.

He reiterated his commitment to economic reforms and the "end of the monopoly in power", as Kazakhstan experienced during the three decades of the authoritarian reign of his predecessor, Nursultan Nazarbayev, who resigned in 2019.

The president-candidate had campaigned on his project to create a fairer and less unequal "New Kazakhstan". But economic difficulties persist, as do authoritarian reflexes.

Mr. Tokayev, who honed his first weapons as a Soviet diplomat, became a key man in the Nazarbayev regime after independence.

Considered his predecessor's henchman, the Kazakh president officially set out to cut the cord amid the January riots, becoming a relentless leader by firing on the rioters in January and arresting relatives of the Nazarbayev clan.

This did not prevent Mr. Nazarbayev from hailing the re-election of his successor, an "indisputable proof of the unshakable faith of the people in (his) reforms".

According to the Kremlin, Mr Tokayev also received congratulations from Vladimir Putin for his "convincing" victory, at a time when relations are going through turbulence, with Kazakhstan disapproving of Russia's invasion of Ukraine.

According to the Kazakh presidency, Mr. Tokayev was also congratulated by the Chinese leader Xi Jinping, who said he was ready to "open a new stage of the Sino-Kazakh strategic partnership", at a time when Beijing wants to strengthen its influence in Central Asia.

If the outcome of this election was sewn with white thread, a slight suspense hovered over the result of Mr. Tokayev, a pure product of the Soviet era who wants to be the man of renewal.

But this "New Kazakhstan" that Mr. Tokayev calls for, in particular via the end of a superpresidential regime, is struggling to get rid of its authoritarian reflexes.

Like this election in line with the Nazarbayev era, which won 98% of the vote in 2015, the political landscape remains deserted and the opposition muzzled by pressure from the authorities.

And OSCE observers pointed to the "restriction of fundamental freedoms, limiting the space for critical voices"

Despite the overwhelming score and lack of competition, Tokayev said the campaign had been "fair and open".

Contrary to the assessment of the OSCE, for which the "excessively restrictive conditions of eligibility unreasonably limit the right of citizens to stand for election".

And on Sunday, AFP saw several voters take pictures of themselves in front of polling stations, many voters citing the "obligation" to show the photo to their employer on Monday.