The Frieze has previously been held in traditional arts capitals like London, Paris and New York, but industry experts say Seoul is a natural choice. 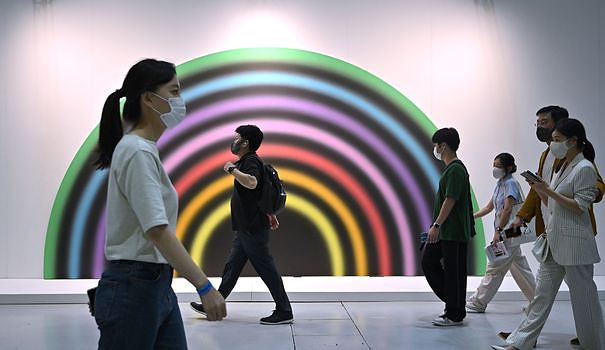 The Frieze has previously been held in traditional arts capitals like London, Paris and New York, but industry experts say Seoul is a natural choice.

In recent years, South Korea has established itself as a cultural powerhouse, with the international success of the Oscar-winning film "Parasite", the Netflix series "Squid Game", or even K-pop superstars, BTS, who conquered the charts.

Seoul has a rich art scene, he adds, with "incredibly talented artists, world-renowned museums, private collections, non-profits, biennials and galleries, making it an ideal place to an art fair.

The London-born fair comes as the art world turns away from Hong Kong, long considered the heart of the lucrative Asian art market, due to financial and political uncertainties.

“Seoul is unquestionably the most dynamic and exciting market in Asia today,” notes Alice Lung, director of the Perrotin gallery, whose second room opened last month in Seoul.

Tim Schneider of Artnet News observes that the openings of major Western galleries like Pace, Lehmann Maupin, Perrotin and Thaddaeus Ropac, followed by Frieze, confirm that Seoul has "progressed" on the international art scene.

"The Seoul Frieze confirms once again that the demand is there," he told AFP.

"When the borders were closed (...), people turned to the (online catalogs)", explains Ms. Lung to AFP.

"It has helped Korean artists and galleries to grow faster and without any physical constraints, bringing in new 'millennial' or Gen Z collectors.

At the same time, soaring property prices have prompted many young South Koreans to look for other investment options.

“Many young people have tasted the bitter losses of stock and cryptocurrency investments. Korean galleries.

The late leader of Samsung Lee Kun-hee would have left a treasure of antiquities and works of art - by Monet, Dali or even Picasso - worth 1.5 to 2.2 billion euros, whose value skyrocketed when he owned it, adds Mr. Hwang.

For Tim Schneider, South Korea is a "microcosm of Asia" in terms of the growth in the number of collectors born after 1980 who now exert a strong influence on the market.

"Buyers in this age group and region have reshaped the hierarchy of the most in-demand artists internationally, and dramatically accelerated the speed at which up-and-coming artists can achieve global fame and the highest prices. high,” he added.

The country's art market was estimated at nearly 393 million euros in the first half of 2022, according to a July report from the Korea Arts Administration Service, more than for all of 2021.

According to Thaddaeus Ropac, who opened his gallery in Seoul last year, South Korea offers a balanced palette of collectors. In addition to specialists "very well established" for decades, "we also perceive a new approach to art" from younger collectors.

Frieze's arrival in Seoul will certainly create new opportunities for the South Korean market, he said, but it's "also a product of what Seoul has become."

Mr. Schneider adds that “Historically, each time a leading international fair has settled in a new city, it has confirmed that the infrastructure of the art market there is sustainable”.

But he refuses to associate Seoul's rise with Hong Kong's eventual decline. "I think it's a mistake to act as if Asia, a vast continent made up of many countries, different cultural histories and tremendous wealth, cannot accommodate two centers of the art market", he observes.