Just before Portugal took the lead, a speedster with a rainbow flag stormed the pitch

For a long time, the preliminary round match of the World Cup between Portugal and Uruguay just languished. 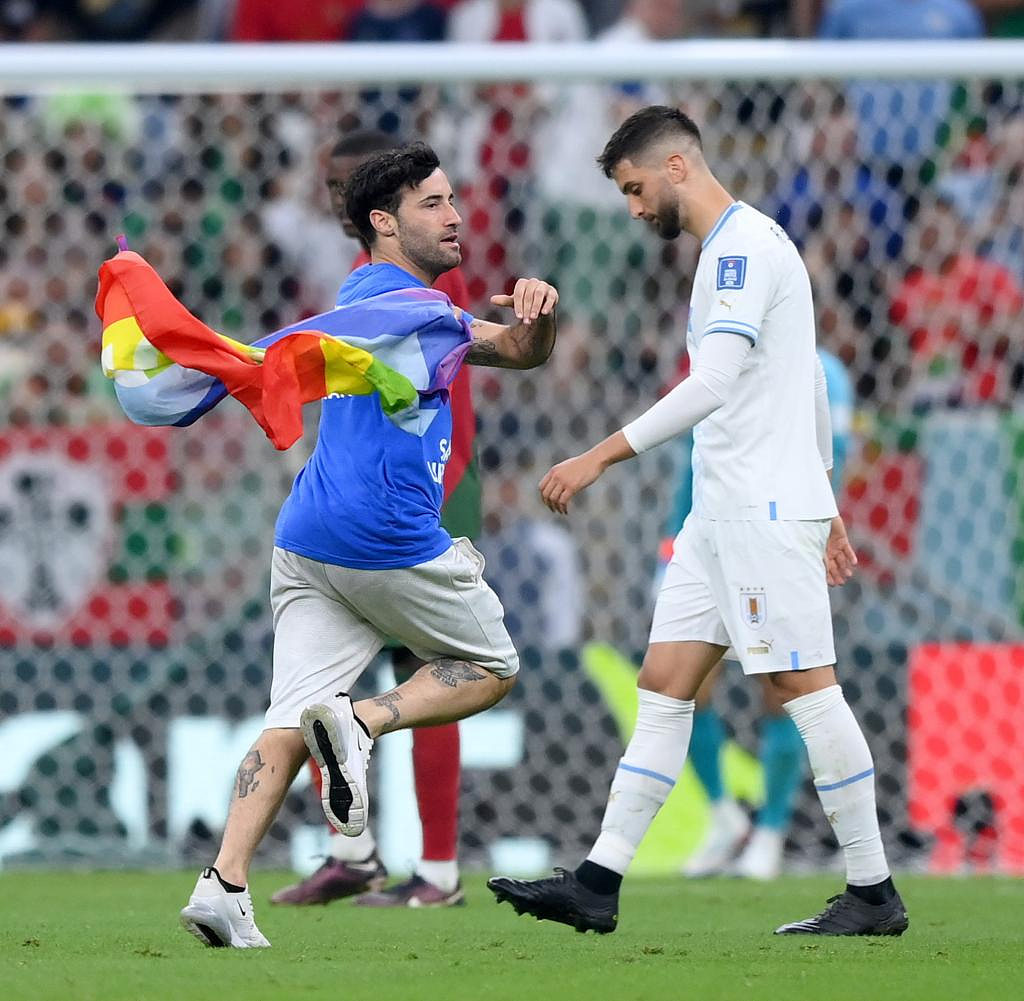 For a long time, the preliminary round match of the World Cup between Portugal and Uruguay just languished. But early in the second half, a murmur went through Lusail Stadium. A speedster stormed the lawn and spread several messages at once (51st minute).

The young man wore a blue T-shirt with a Superman sign and the slogan "Save Ukraine" on the front. The back said "Respect for Iranian Women". The speedster also waved a rainbow flag during his sprint across the square, where he was being followed by several security guards.

After a few moments the spectacle was over again, the stewards stopped the man. Referee Alireza Faghani picked up the flag and took it off the field. It is still unclear whether and what punishment the man faces. The rainbow is the symbol for the LGBTQI* community. LGBT is the English abbreviation for lesbian, gay, bisexual and transgender. The variants LGBTQ, LGBTQI or LGBTQIA are also often used. Each letter represents one's gender identity or sexual orientation.

With the start of the second round of the group stage, it was determined that supporters who show their support for the LGBTQ community with shirts, bandages and similar symbols will no longer be bothered by security personnel. According to dpa information, Fifa had previously asked the Qatari authorities and the World Cup organizing committee to allow rainbow colors in the stadiums. Previously, there were several cases where fans or journalists complained that they were asked to take off clothes with rainbow colors.

In the end, Portugal won 2-0 (0-0) and, after two wins from two games, is early in the round of 16. Uruguay, on the other hand, have only one point in Qatar so far and have to worry about entering the knockout stages. Shortly after the racer's appearance, Bruno Fernandes gave the Iberians a 1-0 lead with an unfortunate cross (54'). At first Ronaldo cheered and let himself be celebrated, but he didn't touch the cross in the middle. The offensive player, who was later replaced, failed to equalize Portugal's World Cup goal record of nine goals by Eusebio, at least for the time being.

The goal put a damper on the South Americans' delicate offensive efforts after the break. It wasn't until the 75th minute that Uruguay created a real scoring opportunity in the person of Maximiliano Gomez. He just hit the post. At the other end, Fernandes made everything clear with his second goal in added time. He safely converted a questionable hand penalty, José Gimenez wanted to support himself with a sliding tackle on the lawn and had caught the ball as it fell. Fernandes almost scored a hat-trick shortly afterwards. Only the post prevented that just before the final whistle.

‹ ›
Keywords:
PortugalTexttospeechReiseFußball WM 2022UruguayPortugal FußballnationalmannschaftUruguay FußballnationalmannschaftFlitzer
Your comment has been forwarded to the administrator for approval.×
Warning! Will constitute a criminal offense, illegal, threatening, offensive, insulting and swearing, derogatory, defamatory, vulgar, pornographic, indecent, personality rights, damaging or similar nature in the nature of all kinds of financial content, legal, criminal and administrative responsibility for the content of the sender member / members are belong.
Related News