Julia downgraded to tropical storm in its crossing of Nicaragua

"Tropical Storm Julia is moving through Nicaragua," the NHC said in its latest report, noting the risk of flash flooding and landslides in Central America. 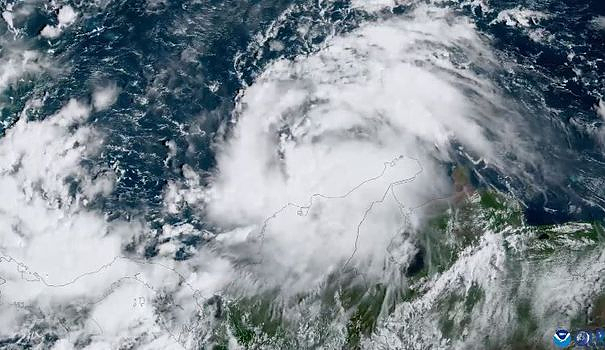 "Tropical Storm Julia is moving through Nicaragua," the NHC said in its latest report, noting the risk of flash flooding and landslides in Central America.

It should then head towards southern Mexico, bringing strong winds to El Salvador, Honduras and Guatemala on Sunday and Monday, according to projections from the American center.

"It's still raining, we're blocked by water, we've been without energy and water since dawn, several houses are roofless and a lot of trees have fallen on the road," Julio Hernandez told AFP. , a resident of Rio Blanco, 220 km north of the capital Managua.

Julia made landfall in Nicaragua at 0715 GMT on Sunday along the coast near Pearl Lagoon as a Category 1 hurricane, according to the NHC.

Strong winds and intense rains had begun to hit the city and the autonomous region of Bluefields, on the Caribbean coast of Nicaragua (east) overnight from Saturday to Sunday.

Torn tin roofs and falling trees were reported as the town of Bluefields, which has 60,000 inhabitants, had no electricity, according to state media.

Before Julia's arrival, the fishermen had secured their boats and the locals had rushed to stock up and withdraw money.

The government had evacuated some 6,000 people in the Pearl Lagoon area and other threatened localities.

The rest of Central America is on alert.

In Guatemala, 22 departments were placed on red alert by the civil protection services as the storm approached, and in Honduras, the government announced preventive load shedding of the main hydroelectric dam, El Cajon.

Especially since this country experienced floods and evacuations at the end of September in the vicinity of San Pedro Sula, the second largest city and industrial lung of the country, and area now most threatened by Julia.

In El Salvador, authorities have also declared an orange alert for the whole country, activating rescue units and preventive evacuations in high-risk areas.

At the end of 2020, hurricanes Eta and Iota hit Central America, leaving at least 200 dead and as many missing, and damage estimated at several million dollars.