Judo Worlds: the French team in silver in the mixed team event

The Blues, who had dominated the Japanese in the final of the Tokyo Olympics last year, lost 4-2. 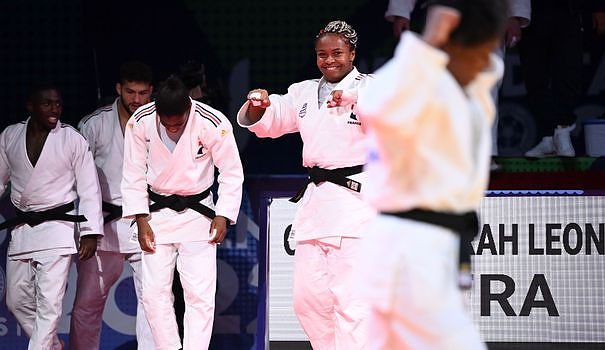 The Blues, who had dominated the Japanese in the final of the Tokyo Olympics last year, lost 4-2.

The Japanese thus take their revenge after their setback last year against the Blues, led at the time by Teddy Riner and Clarisse Agbégnénou, in the final of their home Olympics.

But in Uzbekistan, the France team ended up folding. Romane Dicko (70 kg) and Sarah-Léonie Cysique (-57 kg) brought points to the Blues but Marie-Eve Gahié (-70 kg), Alexis Mathieu (-90 kg), Joseph Terhec (90 kg) and Joan- Benjamin Gaba, despite a heroic fight in -73 kg, could not win.

To reach the final, the French had been able to count on an impressive Romane Dicko, beating the Georgians 4-1 for their entry into the running.

In the quarter-finals, the Blues then very clearly dominated China, the 23-year-old judokate being particularly expeditious against her opponent, knocked down in 22 seconds. Then they beat Israel 4-1 in the semi-finals.

The French judokas therefore leave the Humo Arena in Tashkent with five medals, including a title.

The last two days of competition, with the gold of Romane Dicko and the bronze of Julia Tolofua in 78 kg on Wednesday, in addition to this silver medal on Thursday, have smiled more on the Blues than the start of the week.

During the first six days, only Amandine Buchard in -52 kg and Manon Deketer in -63 kg had managed to win bronze medals.