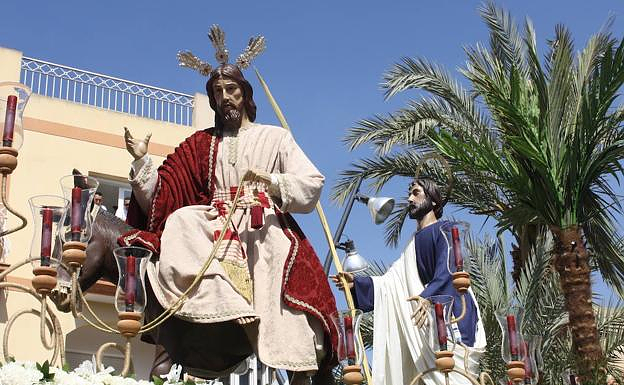 Pulpi was alive last Sunday, April 10. It was a very emotional Palm Sunday with the procession led by Stmo. From the Victoria La Borriquita de Pulpi Brotherhood, Christ of Victory at his Triumphal Entry into Jerusalem. At the religious act were the councilors from the government team, their mayor at the top, and presidents and representatives for Paso Morao, La Borriquita and Paso Negro de Pulpi.

The emotional procession began at 12:01 p.m. and was welcomed by the streets of Pulpi. It included the presence of the image of Christ, followed by the Hebrews wearing their palms, and the accompanying Music Band from Abaran, Murcia (Ecce Homo).

Alberto Murillo (priest of Pulpi) performed the blessing of the palms and branches typical of Palm Sunday before beginning the tour. The bearers carried the throne down to their knees in the final section.

‹ ›
Keywords:
JesusVictoriaEntraTriunfalPulpi
Your comment has been forwarded to the administrator for approval.×
Warning! Will constitute a criminal offense, illegal, threatening, offensive, insulting and swearing, derogatory, defamatory, vulgar, pornographic, indecent, personality rights, damaging or similar nature in the nature of all kinds of financial content, legal, criminal and administrative responsibility for the content of the sender member / members are belong.
Related News