Jeep, church, liquor bottle – coffins can be so bizarre

They are rectangular, sometimes wider at the front than at the back and have sloping sides – this is roughly how the different coffin shapes can be described in this country. 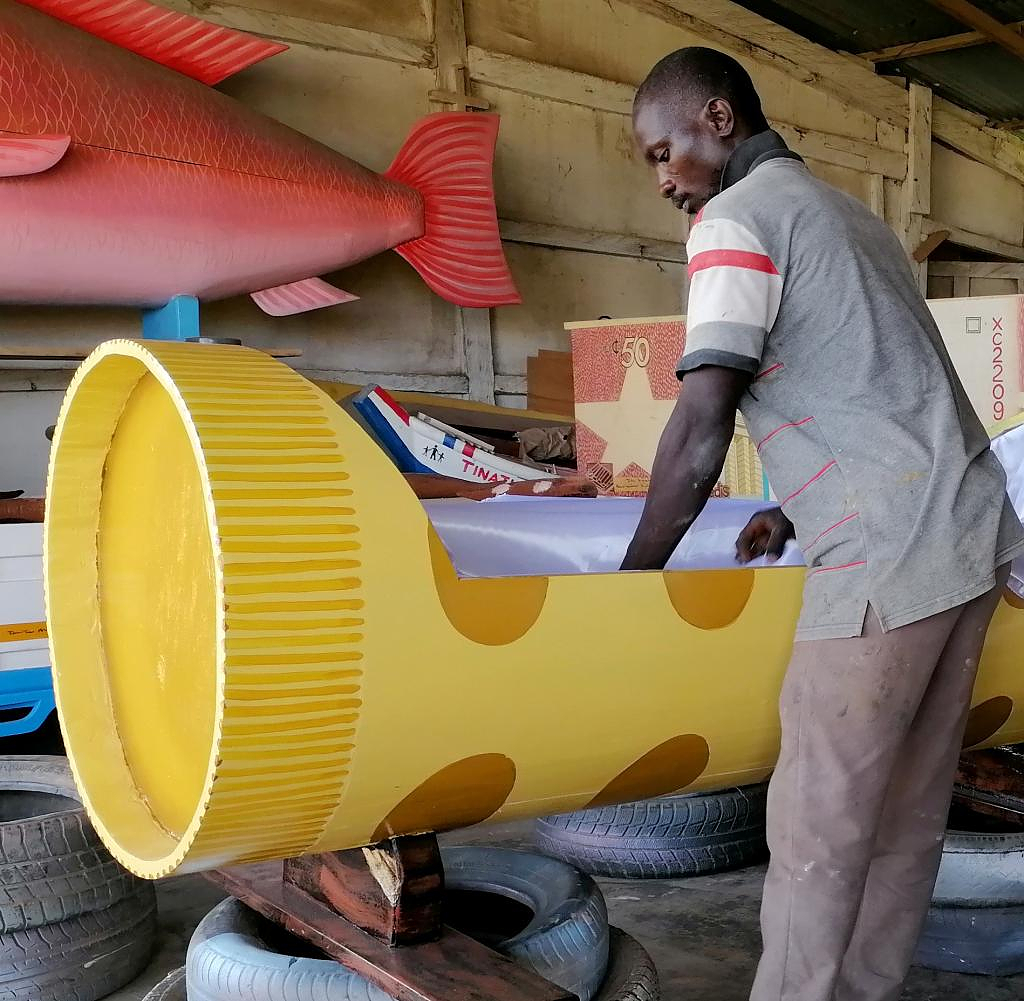 They are rectangular, sometimes wider at the front than at the back and have sloping sides – this is roughly how the different coffin shapes can be described in this country. There are special forms at most for particularly large, small or corpulent people. The most extraordinary: an ecological coffin made of banana or palm leaves.

The people of Ghana can only smile about that. Because the West African country between Togo and Ivory Coast has an extremely extravagant coffin tradition. It is not uncommon for huge teapots, fish or even telephones to be buried at funerals here.

They are built by coffin artists like Serious Hanson. He comes from a family of carpenters, he says while standing in the midst of all kinds of colorful objects. The fact that the open mobile phone, which is around two meters high, will soon serve as a coffin behind him seems completely surreal for the European understanding of funerals.

But in Ghana it is part of the culture. Families have traditionally buried their deceased in coffins. But the unusual shapes have only been around since the fifties, says Cindy Noordermeer-Panou. The Dutch woman lives with her husband Apollo in Ghana's capital Accra and they both run the tourism company Jolinaiko Eco Tours.

The Ga started the tradition. The ethnic group lives in Ghana, Togo and Benin and is considered the inventor of the unusual coffins. They popularized the phenomenon. "For example, if a cocoa farmer is buried in a coffin shaped like a cocoa bean, his career in the afterlife is secured," Cindy explains the belief behind it.

Serious Hanson's employees are working on a new model in the workshop next door. The shell of a church stands on the worktable – so large that there is just room for one person inside. In the front two towers, each with a cross on top, behind them the large nave with side exits including stairs and all sorts of windows. There is no skimping on details.

Hanson brings a stack of photos, and as if the local models weren't crazy enough, the images show what's still possible: a jeep, a pike, yes, and even a liquor bottle. "The deceased was an alcoholic and the family then decided on this motif," says the carpenter, as if it were the most normal thing in the world.

In Germany, coffin art is much more minimalist. If optically high-quality models are used for burials, undertakers tend to use simple boxes for cremation. All coffins have one thing in common: They are rectangular and usually not particularly colourful.

But would it be possible in principle to be buried in Germany in a special Ghanaian coffin? "To be honest, I can't imagine it," says Elke Herrnberger from the Federal Association of German Undertakers e.V. However, there is no direct ban. But there are other regulations that would make a coffin in the shape of a fish, for example, fail.

Because we wouldn't be in Germany if there weren't strict regulations for a grave. For example, there is the maximum digging depth. Although this is a matter for the state, it is 2.20 meters on average. But then a certain amount must be able to be shoveled onto the coffin before the grave is closed. This in turn depends on the local groundwater and soil conditions.

Michael Hartl, Managing Director of the Cemetery Competence Center in Rosenheim, is also skeptical when it comes to unusual coffins in German graves: "For most of the Ghanaian models in the pictures, the grave depths pose an insurmountable problem." determine their own burial sites. However, the DIN standards come into play during the excavation itself.

Hartl still sees possibilities: "However, if such a model is to be produced in our usual dimensions and the specifications are taken into account, then such a coffin could also be used here." Don't harm nature, he adds.

Ghanaians do not ask themselves these questions. Serious Hanson has enough orders. Depending on the complexity and the motive, a coffin is ready in three to four weeks. So the funeral can't take place sooner. But some deceased have to wait much longer for their last respects. Because a funeral in Ghana is a major event and accordingly expensive. Some families have to save for months to be able to pay for everything. A big funeral is considered good manners and nobody wants to jeopardize the family's reputation.

It also depends on the status of the deceased. If the chief, i.e. the head of the village, dies, it can sometimes take a year before the funds for a celebration are raised. "That's how long the deceased is kept in the morgue," says Cindy.

When tourists are traveling in Ghana, they find out who died when, what he looked like and how old he was – whether they like it or not. The coffins are often simply sold on the side of the road, right next to the fruit stand. For example on the road to Winneba, where Serious Hanson also has his carpentry shop. Tourists can also see the extraordinary coffins for themselves in the Kane Kwei Studio, about 30 minutes by car east of Accra. As the Ga, the inventors of the creative boxes, hail from Accra, the handicraft is mainly seen in and near the capital.

And obituaries are not just small notices in the newspaper, but line the walls of houses and sometimes even hang as huge posters on the street. A picture of the deceased is emblazoned on the posters, along with the biographical data and the names of the family members who are mourning them. The procedure for the funeral is also written there.

Even if it seems like a celebration lasting several days, there is mourning, emphasizes Cindy Noordermeer-Panou: "We mourn the deceased, nobody wants to lose a family member." Since many different ethnic groups with equally different traditions live in Ghana, the funerals are also very different .

"A funeral usually lasts three days," says Cindy. The vigil takes place on the first day, usually on a Friday, and then the deceased is laid out. On Saturday, the unusual coffin goes underground and on Sunday, the big thanksgiving service takes place. In the end, the family stays behind, happy about a dignified farewell - and often also in debt.

Serious Hanson continues to work on his assignment. Someone will soon be buried in the imposing church coffin and continue to work as a pastor in the afterlife. When asked which model he would like to be buried in, he laughs out loud, but is certain: it's supposed to be a carpenter's tool. But he will then have to look for a new field of activity on the other side. Because nobody needs coffins in the afterlife anymore.

Arrival: For example with Lufthansa from Munich and Frankfurt to Accra. Transfer flights are offered by KLM via Amsterdam, Turkish Airlines via Istanbul or Brussels Airlines via Brussels.

Entry: Ghana requires a visa for entry, it must be applied for online in advance at the Embassy of Ghana in Berlin, the procedure is tedious (auswaertiges-amt.de; ghanaemberlin.de/consular-section/visa/).

Tour operator: Akwaba Afrika has a 13-day cultural tour to Ghana, including Elmina, the Akwasidae royal festival and Wli waterfalls, from 2979 euros per person without flights, akwaba-afrika.de. Diamir Erlebnisreisen has a combined group tour Ghana/Togo/Benin on offer, 13 days from 2340 euros without flight, diamir.de.

Participation in the trip was supported by Akwaba Africa. You can find our standards of transparency and journalistic independence at axelspringer.com/de/Werte/downloads.

‹ ›
Keywords:
GhanaLänderporträtsAccraStädteporträtsBestattungenBeerdigungenSärge
Your comment has been forwarded to the administrator for approval.×
Warning! Will constitute a criminal offense, illegal, threatening, offensive, insulting and swearing, derogatory, defamatory, vulgar, pornographic, indecent, personality rights, damaging or similar nature in the nature of all kinds of financial content, legal, criminal and administrative responsibility for the content of the sender member / members are belong.
Related News