Ivory Coast: start of the trial of the Grand-Bassam attack in 2016

On March 13, 2016, three young assailants had gone up the beach of Grand-Bassam, near Abidjan and very popular with foreigners, then stormed several hotels and restaurants, firing Kalashnikovs at customers on the terrace before be neutralized by the Ivorian security forces. 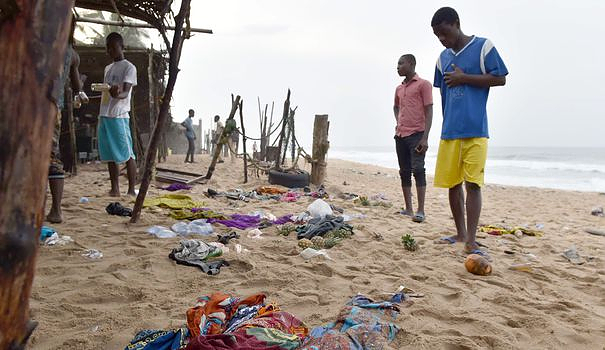 On March 13, 2016, three young assailants had gone up the beach of Grand-Bassam, near Abidjan and very popular with foreigners, then stormed several hotels and restaurants, firing Kalashnikovs at customers on the terrace before be neutralized by the Ivorian security forces.

Claimed by the branch of Al-Qaeda in the Islamic Maghreb (Aqmi), this jihadist attack, the first to occur in Côte d'Ivoire, had killed 19 people, including four French.

"The legal proceedings opened following this attack resulted in the referral of eighteen defendants to the criminal court to answer for acts of terrorism, assassination, attempted assassination, concealment of criminals, illegal possession of weapons fire and ammunition of war and complicity in the said facts", specified a week ago in a press release Richard Adou, public prosecutor of Abidjan.

He recalled that in addition to the four French, nine Ivorians, a Lebanese, a German, a Macedonian, a Malian, a Nigerian and an unidentified person, had been killed during the attack. Thirty-three people of various nationalities were also injured.

Only four of the defendants currently in pre-trial detention in Abidjan should be present at this trial, the others being either on the run or detained in Mali, according to Aude Rimailho, one of the lawyers for the French civil parties.

She believes that it is "small hands" who will be judged and claims not to know "what to expect" from this trial.

"The designers of the attack are in Mali" and "the cooling of relations between France and Mali does not make things easier" as for the judgment of these defendants in Bamako, she declared to AFP.

Me Rimailho will not be present in Abidjan, claiming to have been "warned only last week" by the Ivorian Ministry of Justice.

In 2018, relatives of the four French people killed in Grand-Bassam were received for the first time by the Parisian judge in charge of the investigation. Parallel to the Ivorian investigation, France had indeed opened a procedure because of the presence of these French victims.

Several dozen people, including the three accomplices of the dead assailants, were arrested after the attack, particularly in Mali.

Perpetrated in retaliation for the anti-jihadist operations Serval and Barkhane carried out by France and its allies in the Sahel region, the attack also targeted Côte d'Ivoire, which had delivered members of AQIM to the Malian authorities.

In 2020 and 2021, the defense and security forces were targeted by deadly attacks attributed to jihadist groups in the north of Côte d'Ivoire, which, however, has not seen any more attacks against civilians since that of Grand Bassam.

An attack which severely tested the tourism sector in this country, already weakened by the post-election crisis of 2010-2011 which had killed some 3,000 people.