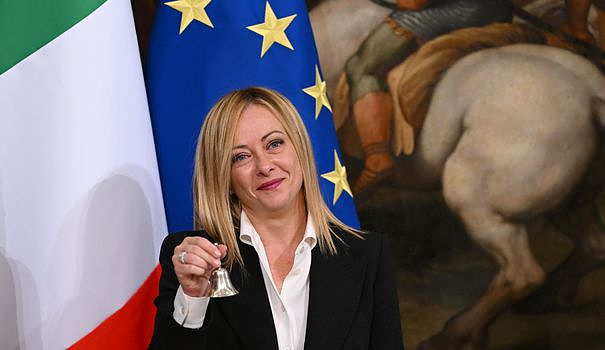 Mrs. Meloni "is putting the finishing touches to the speech she will deliver to the Chamber of Deputies (...) Her intention is to define a programmatic framework (...) with the aim of implementing the commitments made Italians during the election campaign," government sources said Monday evening.

Probably centered on the energy crisis and inflation affecting households and businesses, the speech by Ms Meloni, the first female head of government in Italian history who took office on Sunday, will be followed by a vote of confidence on Tuesday evening in the Chamber of Deputies and Wednesday in the Senate.

Mario Draghi's successor is guaranteed to win these two votes since her coalition with Matteo Salvini's Antimigrant League and Forza Italia, Silvio Berlusconi's conservative party, has an absolute majority in both chambers.

Paradoxically, while his party had camped in frontal opposition to the government of Mario Draghi, his program should be in line with that of the former head of the European Central Bank (ECB), at least in the economic field. .

She has in fact entrusted the crucial portfolio of the Economy to a former Minister of Mr. Draghi, Giancarlo Giorgetti, representative of the moderate wing of the League.

She has also taken on as an adviser at the Palazzo Chigi, the seat of government, the former Minister for Ecological Transition of Mr. Draghi, Roberto Cingolani, who followed energy issues both in Rome and in Brussels.

“On economic policy, there is general popular support in Italy for what Draghi was doing,” observes Gilles Moëc, chief economist of the Axa group, for AFP.

- Abolition of the minimum income? -

Appointments which aim to reassure the markets as well as Brussels and the European partners of the third largest economy in the euro zone, whose growth depends on the nearly 200 billion euros in subsidies and loans granted by the European Union in the as part of its post-pandemic recovery fund.

These funds depend on a series of reforms, ranging from justice to the digitization of public administration, which must be implemented by 2026. Ms Meloni's coalition has promised to review this plan, but it does not It has not yet been said how, and as part of the funds have already been paid, Brussels is unlikely to allow major changes.

"Any strategy of tension with the European Commission would really be tempting fate in a very weak financial environment," said Gilles Moëc.

This manna is indeed essential for a country whose debt reaches 150% of GDP, the highest ratio in the euro zone after Greece, and which should enter into recession in 2023, according to forecasts from the International Monetary Fund.

The many challenges awaiting his government are therefore essentially economic, starting with inflation and the public debt.

Inflation increased by 8.9% year on year in September, fueled by rising food prices (11.4%) and energy prices (44.5%), penalizing households and businesses.

Italy has been particularly affected by the energy crisis due to its dependence on Russian gas imports.

Among the other themes likely to be addressed in his speech is the abolition of the "citizenship income", a minimum income for the poorest which had been introduced in 2019 at the instigation of the 5 Star Movement (ex-antisystem).

On the other hand, Giorgia Meloni, an ultra-conservative who has the motto "God, fatherland, family", has promised not to touch the law authorizing abortion.