"It's pure madness": the scandal of Ukrainian children deported to Russia 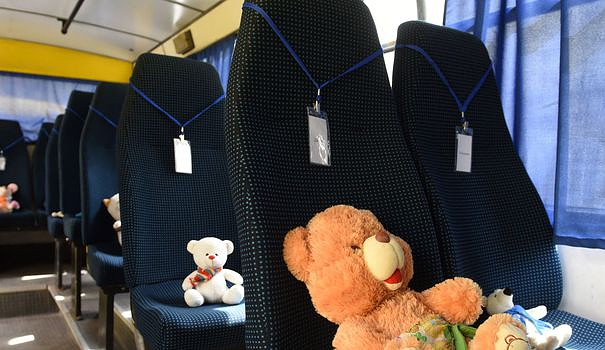 Maria Lvova-Belova never arrives empty-handed in Ukrainian hospitals in occupied areas. To toddlers crippled by bombs, victims of Vladimir Putin's war, the Russian commissioner for the rights of the child always has a gift to offer. A teddy bear and sweets for this boy with an amputated hand; a stuffed giraffe slipped into the bed of an inert little girl, her head bandaged, whom the young blond woman with the face of an angel covers with kisses in front of the cameras. These are the images, of an unnamed cynicism, which Russian viewers have been drinking since the start of the invasion.

Even more problematic, this Kremlin emissary prides himself on having "saved" hundreds of Ukrainian children in these regions that have passed into Russian hands (in Donetsk, Mariupol or Zaporijia) by evacuating them to Russia. All with the blessing of Vladimir Putin: “It is normal that she took these children out of the war zones or the dangerous zones of the Donbass, declared the Russian president on September 16 in front of the press. What's wrong with that? We have to thank her and bow down."

Several of these children, presented by Moscow as orphans, have already been "adopted" by Russian families, in return for an allowance of 320 to 2,500 euros per month, if we are to believe the amounts indicated by the Pension Fund of the Russian Federation. The Russian President has, moreover, facilitated these procedures for the adoption and acquisition of Russian nationality by signing a series of decrees.

The local media rave about these stories, which the affable commissioner Lvova-Belova gladly publicizes. “We recently recovered 31 children from the cellars of Mariupol,” she said in the fall, then insinuating that their parents had abandoned them. The reality is quite different, according to NGOs that conducted the survey. “In Mariupol, we have documented several cases of civilians taken out manu militari by Russian soldiers from shelters and taken to camps where children are sometimes separated from their families before being sent to Russia, explains Laura Mills, researcher at Amnesty International It was under these conditions that Evgeny lost track of his three children in April 2022. "After leaving the Mariupol bomb shelters under pressure from Russian troops, I found myself a prisoner in a 'filtration camp ' for forty-five days", he testified during an online conference organized by the association For Ukraine, for their freedom and ours.

At least 21 interrogation and detention sites of this type exist in the occupied territories, according to the American University Yale, which was able to identify them by satellite imagery. "When I was released, I learned that my children had been taken on a 'holiday' to the Polyany sanatorium in the Moscow region", continues Evgeny, who succeeded, after a course strewn with pitfalls, to recover his children. A nearly impossible operation, most of the time. "According to our information, the Russian government only allows the children's legal guardians to come and pick them up. However, the borders between the two countries are closed. Not to mention that many parents have disappeared", explains Laura Mills, who recalls that the illegal transfer of these children is a "war crime".

Worse, "an act of genocide", accuses Daria Gerasymchuk, adviser to the Ukrainian president in charge of children's rights. "There is a real desire to Russify these minors and to erase the Ukrainian identity", abounds the writer Jonathan Littell. In the manner of the Nazis, who deported en masse Polish blond children with blue eyes...

How many children have been illegally transferred? To date, kyiv has counted 12,467 cases of "deported" children, all listed on the Children of War website. Tel Danilo, 6, last seen in Kryvyi Rih; Volodymyr, 11, and Yaroslavina, 9, disappeared in Mariupol... The government claims to have been able to repatriate 119 young people, but refuses to specify their profiles and the routes they took.

The search for the other missing, which relies on a few snippets of information, will take time. Among the few witnesses, Olena, a resident of the Kherson region who cooked voluntarily for the orphanage in the neighboring village, until the young residents disappeared one spring day. "They had a quarter of an hour to collect their belongings. Then they were loaded into Russian armored vehicles," she told the Ukrainian association PR Army. Five children were rescued by villagers, the others were sent to Anapa, a seaside resort bordering the Black Sea, in southern Russia. On the same coast, in Gelendzhik, a site hosts, according to the Associated Press agency, several dozen Ukrainian children.

"When we asked the Russian authorities how long these children would be kept in these centres, they told us that they would stay there until 'everything is over'. It's pure madness", s' suffocates a Russian activist who seeks to repatriate these young people clandestinely. "The international community must absolutely investigate these deportations, insists Sylvie Rollet, president of the collective For Ukraine, for their freedom and ours. Unicef ​​must react." Contacted by L'Express, the UN children's organization claims to "study ways" of reuniting displaced children and their families, without further details.

In the meantime, forced Russification, via adoptions, is likely to continue. At the head of the largest country in the world, Vladimir Putin is ready to do anything to stem the demographic crisis, which his war only hastens.