"It's not Versailles here!": when activists turn off the light 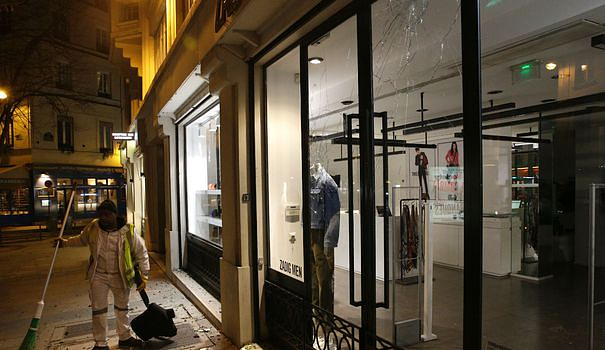 At 9:00 p.m., around twenty Extinction rebellion activists gathered in a circle to listen to a briefing before the evening's action in the center of the capital.

"We absolutely avoid running away" in the event of an encounter with the police, warns "Joad", an experienced activist who lists the legal risks and the instructions in the event of police custody.

The evening action, which is intended to be strictly non-violent, targets businesses lit all night after the departure of customers and luminous screens or billboards. The tools are distributed among the activists, mostly young: posters, adhesive roller, glue and telescopic canes, which allow them to reach a switch to turn off certain signs from outside the stores.

"It's good to talk but it's also good to act according to our convictions", testifies "Sasha Weng", new in the organization.

After half an hour of preparation, two groups spin through the streets of Paris. Joad's team rushes into the Marais, a lively district where luxury clothing and cosmetics shops shine for the most part with a thousand lights long after they have closed.

A first gothic-style jewelry store saw its window covered with a didactic poster: "While millions of people have financial difficulties to get heat and light this winter and power cuts are to be feared, it does not seem reasonable to us to leave businesses lit for the sole purpose of advertising".

Dozens of similar posters will follow taped to opticians, shoemakers, perfumers, mattress sellers... A famous jeans manufacturer sees its red exterior sign suddenly extinguished with the help of a cane - even if the spots all remain turned on outside.

"It's very symbolic because we are aware that the energy expenditure of light panels represents only a very small percentage of the country's energy consumption", admits "Pikou", who has been campaigning for two years.

But he hopes that the message will get through in the face of the government's "double talk": "On the one hand, people are asked to be more sober but, on the other hand, companies are not prohibited from pushing them to overconsumption".

The government has however already taken up the subject: a decree generalizes the extinction of store lights and illuminated advertisements between 1:00 a.m. and 6:00 a.m. from June 1, 2023. The town hall of Paris goes further by asking for the extinction of advertisements lights in its streets at night -- from 11.45 p.m. to 6 a.m. -- from December 1.

Activists continue to sneak through the streets of Paris, among many onlookers who take advantage of the mild autumn and sometimes show their support.

"I totally agree with them", approves Federica, a Milanese tourist, intrigued by the merry-go-round of the activists, who have just turned off a large luminous billboard. Anna, a passerby, also supports the fight against "useless expenses", a "shame".

When the sign of a fashion store goes out in turn, a few rounds of applause erupt in the street. "Cheer!" exclaims a lady.

A business that touts the environmental quality of its clothes with slogans ("because there is no planet B") makes activists wince. In question: three large bright screens in the window, soon covered with posters, affixed with glue.

“We are in a first phase of awareness and prevention,” explains Joad, who will receive positive messages the next day from certain businesses, ready to switch off earlier. “For people who will continue to light up and continue this unnecessary waste, we will move to a slightly more daring phase 2 from December”, he warns.