"It's not over": in Iraq, Iranian Kurdish rebels face missiles from Tehran

Their HQ, they call it "The Citadel". 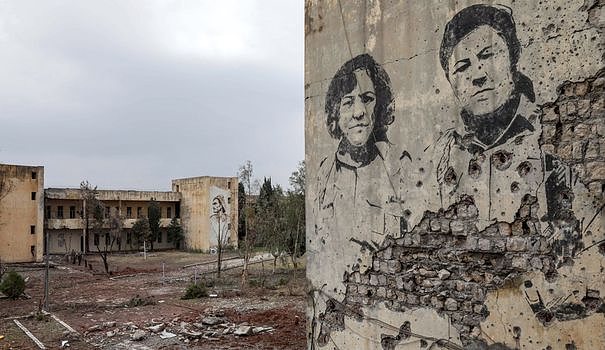 Their HQ, they call it "The Citadel". This fort from the time of Saddam Hussein seems straight out of the "Desert of the Tartars". It is planted on the side of a desert hill away from Koysinjaq (Koya, in Kurdish), a large town in Iraqi Kurdistan where the Democratic Party of Kurdistan of Iran (PDKI), described as "terrorist" by Tehran , took up residence in 1993.

It is also one of the targets of Iran's drones and missiles.

"The Iranian regime has bombed us three times in less than two months," said Karim Farkhapour, a leader of the PDKI. In the ranks of his movement, twelve people were killed and 20 others injured, according to him.

PDKI militants evacuated the fort, but the damage is still clearly visible, especially after the last salvo, fired a week ago.

From the roof of the library dangle electrical cables, jagged bookshelves lie on the ground. In another room, Mr. Farkhapour slaloms through the rubble to reach a miraculously unscathed Kurdish flag.

"The Tehran regime is going to target us again. It's not over, you'll see," he said, a revolver strapped to the belt of his traditional coat.

This is not the first time that the Revolutionary Guards, the ideological army of the Islamic Republic, have claimed strikes against the PDKI, but the recent bombardments, which have also targeted other Iranian Kurdish rebel groups in Iraq, have taken particularly acute because of the political context in Iran.

Iranian power accuses these factions of "importing weapons" from Iraq and encouraging the demonstrations that have rocked Iran since the death on September 16 of the young Iranian Kurd Mahsa Amini, after her arrest by the vice police. .

"False", replies Moustafa Mouloudi, one of the leaders of the PDKI in Koysinjaq.

"There is no evidence that we smuggled weapons into Iran," he said. "It's a lie told by the regime to hide the truth from the people. The terrorist is the regime."

Iranian Kurdish groups such as the PDKI or Komala have long been in Tehran's sights. Installed in Iraqi Kurdistan since the 1980s with the blessing of Saddam Hussein, then at war with Iran, they are often very left politically.

If analysts believe that they have almost interrupted their military activities, they continue to militate from exile.

Denouncing the discrimination suffered by the Kurdish minority in Iran (approximately 10 million inhabitants out of the 83 million in the country), the PDKI wants a "federal Iran" in which a Kurdish province would be created with considerable autonomy, explains Karim Farkhapour.

"We are secular and we fight for women's rights," he said.

The organization, financed thanks in particular to donations from sympathizers, obeys a rigid hierarchy. As proof: during a visit to PDKI militants in Koysinjaq, AFP was asked not to deviate from the program established by the governing bodies.

Within the PDKI, "we are free", assures Shaunem Hamzi, a 36-year-old activist living in Koysinjaq with her parents.

Hair in the wind, the young woman says she lived in a PDKI camp located 500 meters from the citadel. With 200 other families, she lived in one of those single-storey cinderblock or concrete houses that formed this miniature village. Until the salvos of Tehran.

The latest attacks "have been much more intense than the previous ones. The children, the families were very scared. Now we are living in fear," she says.

Like all the other inhabitants, Shaunem Hamzi had to leave the camp and lives one day in a house found by the PDKI, another day in another.

As an Iranian Kurdish woman, she claims to identify strongly with the protest movement that is shaking Iran.

“If the regime tries to stop us even temporarily, the demonstrations will still start again, because it is in our hearts”, she thunders. "The protesters will never obey the regime's rules."