"It is true, we have not come many to the concentration against Granada's blue zone"

Protesting against the ORA (the Parking Regulation Ordinance of Granada) at ten o'clock Friday morning is a poor time. 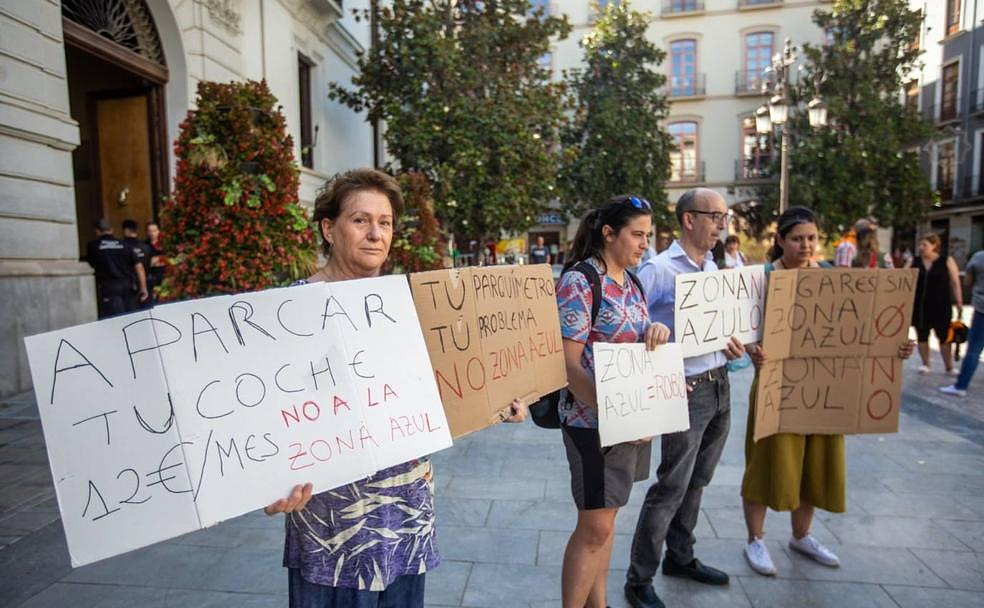 Protesting against the ORA (the Parking Regulation Ordinance of Granada) at ten o'clock Friday morning is a poor time. Conchi Martin, the spokesperson for the platform of residents from the Figares neighbourhood against the extension to the blue zone, was in good spirits. He was accompanied by four people at Plaza del Carmen on Friday, 10 o'clock, ready for the PSOE government team to listen. At the time, the municipal plenary session had just finished.

Conchi Martin, spokesperson of the Figares neighborhood platform explained that they have "three hundred signatures against expanding the blue zone." They are aware that they have fewer than that, as the neighborhood is home to 40,000 people. According to their data, "it is true that we have not come many to today's concentration." He acknowledged that they are only just beginning. He also assured them that Adelante Andalucia was there to support them, and "with whom we've started conversations."

An associate of the Zaidin Campus neighborhood association also attended. The Popular Party has supported this association. The municipal group of PP of the City Council of Granada voted in favor of these neighbors. They registered 550 signatures to the Consistory last Week with the intention of "the PSOE backing down" for the extension of blue Zone.

In a press release, the PP has stated that it disagrees with the effect of this measure on "different neighborhoods of the city where blue parking zones are going to be implemented. This was a decision taken by the socialist government without any consensus with the affected".

We were there at the Ronda municipal district board, presided over by Raquel Ruz (Mobility). She explained that the dialogue was a failure. "Raquel Ruz vehemently opposed our demand. She stated that twelve euros per month were not a large expense and that our car was our problem.

Raquel Ruz, Councilor of the Platform, was rebuffed by the platform. "Our car is our responsibility. But the city's urban mobility and infrastructure is their responsibility. They have made it difficult for residents living in Granada and other areas in the Figares neighbourhood>>.

His criticism of the expansion to the blue zone is based upon the fact that they "want to introduce a tax and privatize public spaces, handing over parking lots, which were previously free to a private firm such as the ORA."

They have a right to do so because "in a situation of inflation out of control, with prices of the most basic items becoming more expensive, the Granada City Council decided to make living more difficult." We oppose an increase in taxes that will be paid by the ORA>>.

‹ ›
Keywords:
VerdadVenidoPoquitosConcentracionZonaAzulGranada
Your comment has been forwarded to the administrator for approval.×
Warning! Will constitute a criminal offense, illegal, threatening, offensive, insulting and swearing, derogatory, defamatory, vulgar, pornographic, indecent, personality rights, damaging or similar nature in the nature of all kinds of financial content, legal, criminal and administrative responsibility for the content of the sender member / members are belong.
Related News