It is difficult for the government to offer discounts because there is no monthly subscription for metropolitan buses.

There are some peculiarities to the province that will limit the impact of the reduction in public transport services announced by the government starting September. 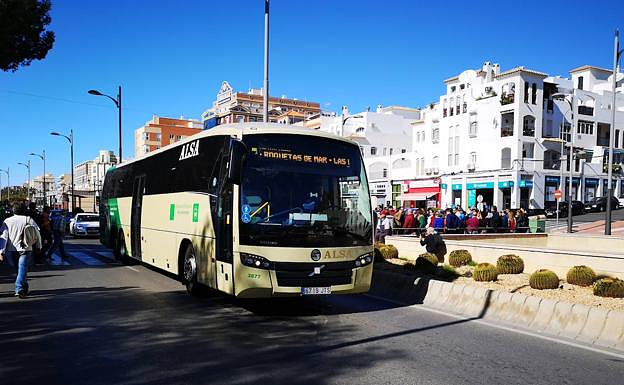 This is one of many measures that the Government approved to ease the crisis, and particularly the rise in fuel prices. This is similar to what other European governments have done, like the German, which introduced a transport pass for 9 euros per month a few weeks back. Spain's reduction will be less drastic, with 50% for services that are directly dependent on the State (Cercanias trains), and 30% for those that are dependent on municipalities or communities. However, some local and regional organizations have committed to paying a higher percentage to match 50% that the Government will apply on its transport services.

The province has not yet clarified how they will apply the reduction. If they do plan to join, they are all currently studying the matter.

The Junta de Andalucia is one example of this. Their metropolitan transport services are not eligible for the initiative. They do not have the option to purchase a multi-trip ticket or a monthly subscription, and they also cannot buy a 10-trip ticket at lower prices. These are the modalities that the Government has targeted.

Only discounts are available in the metropolitan area through the Consortium's wallet, which allows you to buy single tickets at 30% off. These services may not be available due to the Royal Decree of Government, which in principle excludes this type of ticket.

Sources at the Ministry of Development told IDEAL that they are currently reviewing the measures taken in relation to public transport. They have also transferred questions to the Government regarding the bonuses. These will be addressed next week at a sectoral council meeting. This issue is being dealt with by the governments and communities.

The three largest municipalities are in a dissimilar situation when it comes to urban services. Roquetas De Mar is the most extreme example, with over 100,000 residents and still not having this service, despite being required to do so by the Law of Bases of Local Regime. It has been almost two decades since Roquetas was populated by 50,000 people.

There is an urban service Almeria capital, and El Ejido. After accusing the Government with "improvisation", the capital did not clarify whether or not it intended to apply or raise the discount and assured that it was waiting for the publication of the order that would regulate these discounts. There are many monthly subscriptions available, with prices ranging from 32.55 for the basic one to just over 22 euro and 11.90 for students aged under 30. These would cost 8.33 Euros. The capital also has multi-trip vouchers for 10 trips, priced between 5.55 and 2.90 euros for students and pensioners.

‹ ›
Keywords:
AusenciaAbonoMensualBusesMetropolitanosDificultaDescuentoGobierno
Your comment has been forwarded to the administrator for approval.×
Warning! Will constitute a criminal offense, illegal, threatening, offensive, insulting and swearing, derogatory, defamatory, vulgar, pornographic, indecent, personality rights, damaging or similar nature in the nature of all kinds of financial content, legal, criminal and administrative responsibility for the content of the sender member / members are belong.
Related News