Ireland: a beauty contest criticized for its lack of diversity

This television competition, dubbed "Rose of Tralee", made a comeback this year after being canceled two years in a row due to the pandemic. 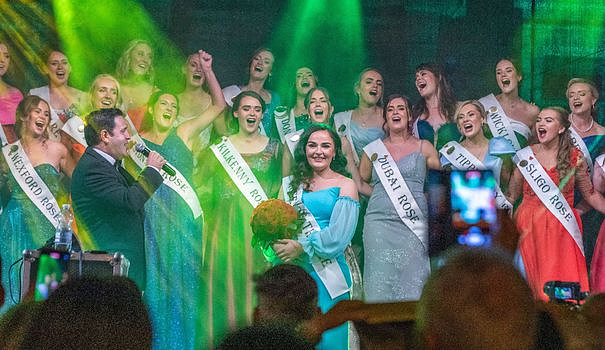 This television competition, dubbed "Rose of Tralee", made a comeback this year after being canceled two years in a row due to the pandemic.

When it ended this week in this town in County Kerry (southwest of Ireland), the candidates, thirty-three young women dressed in colorful evening dresses, sang the famous song.

Known as the "roses", they are Irish or from the Irish diaspora around the world, and have won local selections attracting thousands of entrants.

Cathrena Collins, a 24-year-old law student, thus represented the Irish community in her New York City, just as her grandmother had done in 1965. "It was a big thing for me. Growing up, I I've always heard about it," she told AFP.

A country of five million people, Ireland has traditionally been a country of emigration, which changed when its economy took off in the 1990s, attracting European immigrants in particular. Most residents identify as white, but ethnic diversity is increasing in the country.

But despite candidates from all over the world, the 2022 candidates were all white, prompting criticism of the lack of diversity, including those of a former "rose", Brianna Parkins.

"There seems to be a lack of diversity," the 2016 candidate told Irish public broadcaster RTE. that they truly reflect Irish society," she added.

Last year, the competition announced a series of changes to modernize itself. Married women are now allowed to participate, the age limit has been raised from 28 to 29 and transgender women are welcome.

Established in 1959 and a fixture on Irish television since it first aired in 1967, the competition has attempted to evolve over time.

Irish author Mary McGill recalled that it was set up at a time when "Catholic Puritanism" was a "huge part" of Irish identity and femininity was placed "under a form of extreme scrutiny and expectation. extreme in terms of morality".

"I think because of those origins, that baggage is still present," she said, while considering that the competition is "oddly able to tap into the spirit of the times."

"It has managed to breathe new life into the 21st century because of the connection it has with Irish identity, nostalgia and the international community."

Bodybuilding enthusiast, Joy Quigley, 26, contestant from Wexford (southeast of Ireland) struck a few poses for the audience in a sparkling green dress, showing off a tattoo on her arm.

"I think the modern Irish girl is not a pretty, glamorous princess. We're a little rough around the edges, and it's important that we can relate to that," she told L. AFP.

Broadcast two evenings in a row at prime time, the contest surfs on a kitsch image.

In the audience, men crushed a few tears when they heard the candidate from Queensland (northwestern Australia) read a poem evoking homesickness.

She mentioned the chip sandwiches, very popular in Ireland.

'Rose of Tralee' also celebrates the bonds forged between Irish communities around the world.

Maysen Tinkler from Toronto, Canada, who was diagnosed with autism just over a year ago, said she received support from other contestants.

For the executive chairman of "Rose of Tralee", Anthony O'Gara, the criticisms are "absurd". Pointing out that three of the last four winners of the competition were of mixed ethnicity, he expressed his exasperation: "I'm tired of people who find new reviews every year to attack the competition".