Iraq: Seven bodies removed from the rubble of a Shiite shrine

On Monday morning, nearly two days after the landslide, Civil Defense relief workers continued to work to clear rocks and other debris from Imam Ali's Qattarat, a shrine near the holy city of Kerbala, in central Iraq. 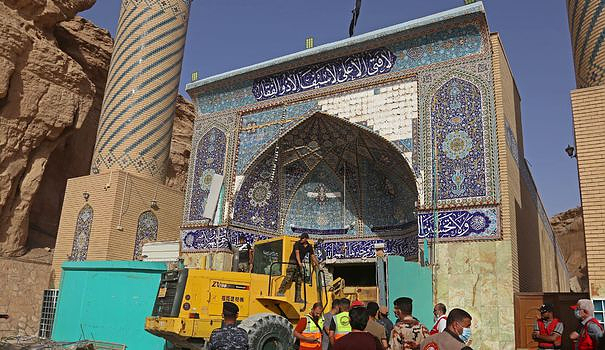 On Monday morning, nearly two days after the landslide, Civil Defense relief workers continued to work to clear rocks and other debris from Imam Ali's Qattarat, a shrine near the holy city of Kerbala, in central Iraq.

In the early hours of the morning, "unfortunately, we found two bodies, that of a man and that of a woman" under the rubble, Jaoudat Abdelrahmane, director of the Civil Defense media department, told AFP.

For the time being, the rescuers have removed seven lifeless bodies from the rubble of this place of pilgrimage: four women, two men and a child. Three children were rescued and hospitalized.

"We continue to search for other victims" in the rubble, continued Mr. Abdelrahmane. “Witnesses told us that the body of a woman was still” under the rubble.

The landslide occurred on Saturday afternoon, when a portion of the rock face that surrounds the shrine fell off, sinking part of its roof.

According to Nawas Sabah Shaker, spokesperson for the Civil Defense, the landslide is due to "high humidity" which separated part of the rock from the rest of the wall.

This landslide caused the collapse "of about 30% of the surface of the building of about 100 square meters", he added.

The tragedy caused considerable emotion in Iraq, whose population is predominantly Shia Muslim. But the controversy begins to swell on the responsibilities.

"We want to know what happened, why it happened," lamented AFP Bassem Khazali, a witness whose nephew died in the accident.

The essential Shiite leader Moqtada Sadr, accustomed to outbursts against the Iraqi government and its political adversaries, attacked Sunday evening the "corrupt" and the "corruption which once again caused civilian victims".

Imam Ali's Qattarat is located about 25 km west of the holy Shia city of Karbala and it attracts pilgrims by the thousands every year. It is dedicated to Imam Ali, son-in-law of the Prophet Muhammad and founding figure of Shia Islam.

Imam Ali would have stopped there with his army on his way to the Battle of Siffin in 657 and would have caused a source of water to gush there.

However, the Shiite Waqf - a religious institution that administers the property of the Shiite community in Iraq - claimed "not to manage" the sanctuary, nor the land on which it is built.

On Facebook, the governor of Kerbala, Nassif al-Khattabi indicated that "the shrine does not belong to a specific group, but to individuals who have been summoned", without however specifying their identities, or which authorities intended to question them.