The drought hitting the "land between the two rivers" - Tigris and Euphrates - is unprecedented since 1930. 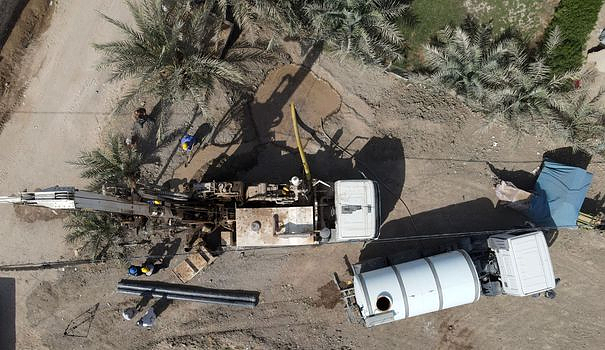 The drought hitting the "land between the two rivers" - Tigris and Euphrates - is unprecedented since 1930. With falling rainfall and reduced river flow, it is pushing Iraqis to dig more and more wells for agriculture.

A farmer "from father to son", Mr. Fatlawi told AFP that he cultivates rice and wheat in the province of Najaf, where southern Iraq begins. But not this year, because "there is a severe shortage of water", deplores the fifties with the rough beard and the white jellabah.

Small consolation: he paid the local authorities to drill a well and "water the palm trees and water the animals", explains this father of five children. He can also grow radishes, onions, dill.

Near his house in a hamlet near al-Mishkhab, a drill swirls out of the ground, ejecting muddy water.

In the past he had dug an artisanal well, which the authorities forbid. “Sometimes the water was bitter, sometimes it was salty,” he recalls.

Iraq is one of the five countries in the world most exposed to certain effects of climate change, according to the UN.

Predicting "a new year of drought", the Ministry of Water Resources announced in early October the drilling of wells in six provinces.

Until mid-2022, some 500 wells have been dug. But to prevent overuse of groundwater, utilities are hunting down illegal wells.

Welcoming the current regulations, a UN report points however to the absence of meters on the wells and "of a pricing system, to limit the use of groundwater".

"There are no incentives to encourage the use of modern irrigation technologies", lamented in September the report of the Economic and Social Commission for Western Asia (ESCWA).

At a time when every drop counts, the overwhelming majority of farmers flood the land to irrigate, an ancestral practice synonymous with waste.

Responsible for water resources in Najaf, Jamil al-Assadi explains that the wells are dug in areas "formerly irrigated by rivers and canals".

They can be used to "water animals, irrigate orchards and plantations with a limited area", he says. But not for rice or wheat, due to the salinity of the water and the low quantities drawn.

His ministry has cut drilling rates in half, he said. In exchange, "the farmer must use modern irrigation methods to preserve the strategic reserves of groundwater".

At the gates of the Najaf desert, Hussein Badioui has been planting barley and fodder on 20 hectares for ten years.

Like his neighbours, the sexagenarian depends exclusively on wells. However, he recognizes "a drop in the water level due to the multitude of wells".

"The excessive use of groundwater has led to many problems," warned the Ministry of Water Resources in July, calling for "the preservation of this wealth," according to the state news agency INA.

Lake Sawa, in the south, has thus dried up due to a thousand illegally dug wells which have drained the water table which fed it.

Another challenge that may result from the overexploitation of groundwater: "if large quantities of water are taken, the salinity rate increases", warns the ministry.

In Iraq, where agriculture represents one job in five, climatic upheavals and the insufficient response of the authorities accused of corruption and incompetence are already causing a rural exodus and social tensions.

Sporadically in the south, residents demonstrate, demanding government action for neighboring Turkey to increase the flow of rivers by opening the floodgates of dams upstream.

Salah al-Faraon, 75, planted his ten hectares of wheat in winter and rice in summer. Cultures drastically limited by the authorities "because there is not enough water".

"Without rice and without wheat, how to live without income?" Plague the farmer. "We can migrate, but to go where? It's the whole country that is stolen."