The selections of the two countries, which do not have diplomatic relations, had already faced each other at the World Cup for the "match of brotherhood", won in France by Iran 2 to 1 in an incandescent atmosphere in 1998. 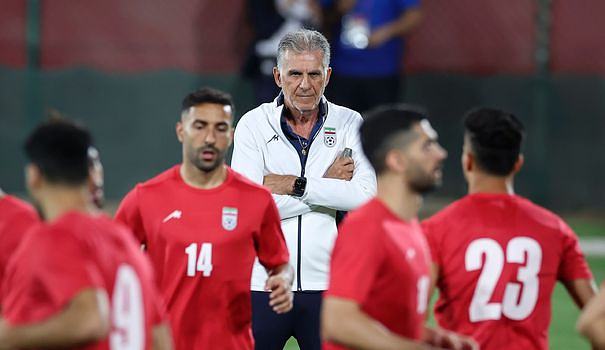 The selections of the two countries, which do not have diplomatic relations, had already faced each other at the World Cup for the "match of brotherhood", won in France by Iran 2 to 1 in an incandescent atmosphere in 1998.

Played in a context of thaw between the West and the Islamic Republic, the meeting had been the occasion for gestures of fraternization between the two teams who had mixed to pose together in the official photo of the match, offering flowers and pennants.

The context is much more tense this year, against the backdrop of the unprecedented protest movement repressed in blood by Tehran.

Iranian players are playing their World Cup scrutinized by the whole world. Before each of their first two meetings, they had to answer the same questions, sometimes very insistently asked by the Western media.

Will they refrain from singing their anthem to signify their support for the protesters as they did against England but not against the Welsh? Will they celebrate their goals? Will they make symbolic gestures to denounce the repression?

Several players, including star Sardar Azmoun, denounced the crackdown on social media. But many supporters of the demonstrators criticize Team Melli for its attitude, such as when it was received by the ultra-conservative president Ebrahim Raissi before his departure for Doha.

Other highly commented images, those of the police ostensibly celebrating the victory against the Welsh, which was greeted by a tweet from Supreme Leader Ali Khamenei.

Believing that his players are stuck in a situation where no matter what they do, they will be blamed, their Portugal coach Carlos Queiroz seems to have accepted to take on the role of lightning rod for criticism and tried to reduce the game to its only dimension athletic.

It is considerable: a draw could be enough to ensure Iran the first qualification in its history in the round of 16 of a World Cup, for its sixth participation.

The United States, which absolutely needs a victory to pass this round, nevertheless brought geopolitics back into the pre-match debates.

On its Twitter account, Team USA removed the symbol of the Islamic Republic from the Iranian flag used to announce the game, a "one-time gesture to show our solidarity with women in Iran". The official flag was then handed over.

Eager to calm things down, US Secretary of State Anthony Blinken felt that this match remained a simple sporting match.

"Let the athletes do what they have to do," he said Tuesday at a NATO meeting in Bucharest. "I don't think there is any particular geopolitical aspect (...), it has to be a competitive game, let the game have its own logic."

In the same group, the other meeting, played at the same time, offers a British poster, with England in the role of the big favorite against Wales. The English are almost qualified and will finish first in the group if they win. The Welsh need a miracle to extend their stay.

In Group A, the host country Qatar is eliminated, and its Dutch opponent, undefeated for 17 matches, will have victory as its only objective in order to ensure not only qualification but also first place (4:00 p.m.).

If that should be the case, which seems the most likely scenario, Ecuador and Senegal will fight for the second ticket. The South Americans only need a draw but remain suspended on the fate of their providential striker, Enner Valencia, who scored all three goals for his team against Qatar (2-0) and the Netherlands (1 -1) but came out injured.

Arrived full of optimism and dreams of glory, the African champions will have to win. A premature return to Dakar would be a terrible disappointment for Aliou Cissé's team.

In addition, the Italian who entered the lawn of the Portugal-Uruguay match on Monday evening with a rainbow flag and a T-shirt in support of Iranian women and Ukraine, was quickly released "without further consequence," the Italian Foreign Ministry announced on Tuesday, confirming information obtained from a local source by AFP.

Mario Ferri, who walked the lawn for about thirty seconds in the 52nd minute before being overpowered, is used to this type of intrusion. During the 2014 World Cup in Brazil, he entered the field during Belgium-United States with a t-shirt bearing the inscriptions "Save the children of the favelas" and "Ciro Vive", in tribute to a supporter of Naples killed shortly long ago, according to the Italian agency AGI.

It is the first time that a match has been marked by such intrusion since the start of the competition organized in Qatar, in the face of Western criticism over the treatment of people from the LGBT community. In the small emirate, homosexuality is subject to criminal prosecution.