Iran: NGOs warn of repression in a Kurdish city

Protests have been taking place across Iran for more than three weeks. 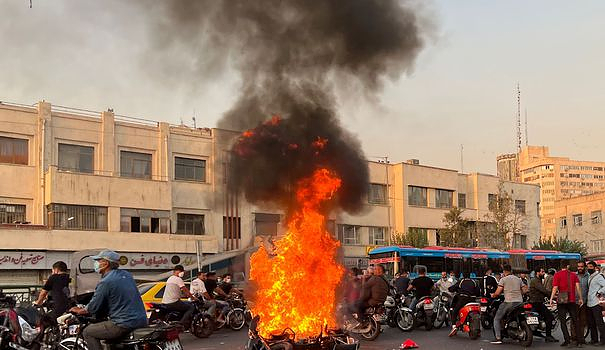 Protests have been taking place across Iran for more than three weeks. They were sparked by the September 16 death of Mahsa Amini, a 22-year-old Iranian Kurd, who died three days after she was arrested by vice police in Tehran for allegedly breaking the Republic's strict dress code. Islam for women, including the wearing of the veil.

Despite hundreds of arrests and deadly repression, the protest movement, the largest in Iran since that of 2019 against the rise in the price of gasoline in 2019, does not weaken.

At least 95 people have been killed since September 16, according to the Oslo-based NGO Iran Human Rights (IHR), while Iranian authorities report dozens of deaths including 18 members of the security forces.

The demonstrations were particularly important in Sanandaj, capital of the province of Kurdistan (north-west), the region from which Mahsa Amini is from. The violent repression could have a heavy human cost, worry NGOs who accuse the authorities of bombing certain neighborhoods of this city.

According to Hengaw, a Norway-based NGO, an Iranian warplane arrived at Sanandaj airport overnight from Monday to Tuesday and buses carrying special forces are on their way to the city. Residents are having difficulty uploading videos of the events due to internet access restrictions, Hengaw adds.

According to the NGO, at least seven people have been killed by security forces in Sanandaj and other Kurdish towns since Saturday.

AFP could not independently verify these claims.

Amnesty International is "alarmed by the crackdown on protests in Sanandaj, amid reports of security forces using firearms and firing tear gas indiscriminately, including into homes," it said. lamented the NGO.

According to the Center for Human Rights in Iran (CHRI), based in New York, this region risks experiencing the same fate as that of the province of Sistan-Balochistan, in the south-east, where more than 90 people have been killed in the city of Zahedan since September 30, according to NGOs, in protests unrelated to the death of Mahsa Amini.

According to NGOs, these protests followed accusations that a police officer raped a teenage girl.

Analysts say protests in Iran are proving particularly difficult for Supreme Leader Ayatollah Ali Khamenei, 83, to manage because of their length and multifaceted nature, ranging from demonstrations to individual acts of defiance. .

On Monday, the protest extended to the oil sector. Videos shared by media show striking workers burning tires and blocking roads outside the Assalouyeh petrochemical plant in the southwest of the country.

The official Irna agency has denied any "strike" by workers in this area, where production in the gas and petrochemical complexes is "normal".

Similar actions were reported in particular in Abadan, in the west, where a strike was underway on Tuesday, according to the IHR.

In addition, protests take place regularly on university campuses and in schools. UNICEF executive director Catherine Russel said she was "extremely concerned about reports of children and adolescents being killed, injured and arrested".

The violent repression has been widely condemned in the West. Sanctions have been taken by the United States, Canada and the United Kingdom against senior Iranian officials.

For its part, the European Union has agreed on sanctions against those responsible for the repression, French Foreign Minister Catherine Colonna said on Tuesday.