Insomnia, panic, stress... The victims of the Nice attack caught up in the horror 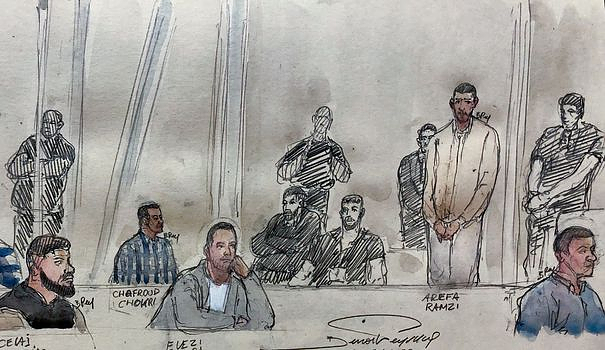 On July 14, 2016, Jean-Claude Hubler was on vacation in Nice. Like about 30,000 people, this salesman set up, around 8 p.m., on the beach bordering the Promenade des Anglais to admire the fireworks launched for the national holiday with the family. But a few minutes after the show, around 11:30 p.m., Mohamed Lahouaiej-Bouhlel, a 31-year-old Tunisian, drove into the crowd aboard a delivery truck, killing 86 people. "I immediately understood that it was an attack. I went back to the Prom', and I discovered a scene of horror. It was a scene of war", recalls Jean-Claude Hubler.

Shocked, the man still decides to react as quickly as possible, in order to save as many victims as possible. "I only had my poor first aid certificate. If there is a road accident, I stop. But something like that... I had never seen that". Somehow, Jean-Claude approaches the firefighters, covers the bodies of the deceased, accompanies those still alive. "A lady died holding my hand. I was with her the whole time." After these first minutes of horror, the holidaymaker then tries to prevent thefts or the photos and videos of curious people, who try to immortalize the scene. Above all, he protects as best he can the public who have remained on the beach, in particular the children who have come by the dozens - sometimes with their families, sometimes with their summer camp. "Above all, they shouldn't see that," breathes Jean-Claude, who will not leave the beach until around 1:15 a.m., when the CRS arrive.

"I thought it was over then. But it was far from the case," he says. On returning home, the 50-year-old can't sleep a wink. "As soon as I wanted to sleep, I saw the face of this lady whose hand I held". Back in Paris, accompanied by the association France Victimes, he made an appointment with a psychologist. He will see her every 15 days for two years. "We always say to ourselves that we don't need a shrink! But I fell asleep with flashes constantly, I had memory loss, insomnia". For a long time, Jean-Claude invariably dozed off around 8 p.m., only to wake up with a start at 1:15 a.m. "Exactly the times during which I was on the Prom'. As if my brain had gone into automatic mode. It had faded, but right now, obviously, it's coming back", explains the co-president of the victims' association Life for Nice.

He is not the only one: while the trial of these attacks opened on Monday, September 5 in Paris, many victims and families are overtaken, despite themselves, by the horror of this night. “We have more and more people coming back to the association. Some had not yet declared themselves victims, others need to talk,” testifies Jean-Claude. Last week, one of them emailed the co-president at 3 a.m., sharing with him her insomnia. "We are all the same. This trial moves us, we expect a lot from it".

"With the opening of the trial, the symptoms return. It's perfectly normal, and that does not mean that there is a relapse, or serious psychological regression among the victims", analyzes Asma Guemifi, director of the Phoenix Center, Psychotrauma and Resilience Institute (CPPR) of the Rediscovered Momentum Foundation. For six years, this clinical psychologist has welcomed "a dozen" survivors and families of victims of the night of July 14, 2016. All had completed their therapy. Half of them contacted her again before the trial, worried. "They come back saying 'It starts again, it starts again!'".

A mother who lost sight of her daughter during the attack and convinced that the latter - still alive - had passed under the wheels of the truck, an injured person whose knee pains return even though the doctors assure him that "everything is physiologically normal", a grieving thirty-something... All speak of the same symptoms: fear, crying, flashbacks, sleep disturbances, uncontrollable panic, loss of taste for everything. "It's quite simply the awakening of the traumatic memory. The victims project themselves into the past and into the emotions they experienced at the time, which can be described as a real psychic tsunami", deciphers the psychologist.

"Our job is to reassure them: to explain that it is an exogenous event that awakens endogenous symptoms on which it is possible to work". To do this, Asma Guemifi goes through the word. In individual or group sessions, she makes the victims talk to each other, discusses the upcoming trial, discusses the symptoms that come and go... Through drawing and writing, she also offers her patients the opportunity to treat their anxieties via the art therapy. "The body also records the trauma, we are the living witness of what we have experienced. It sometimes releases a lot of tension," she explains.

Specialized in the management of trauma and post-traumatic stress, Damien Scolari also works with victims of the attacks of July 14, 2016. "Many patients came back to me in the spring. There is apprehension: some are afraid of the defense lawyer, imagine a scenario in court...". Psychologist at the Nice Victims' Home, he tries to reduce their symptoms, for example by working on breath or cardiac coherence. "A person who has experienced such a trauma will tend to be afraid of themselves, of their anxiety attacks, of emotional overflow. By showing them through small exercises that they can manage their breathing or their heart rate, they calms down".

The French Association of Victims of Terrorism (AFVT), for its part, offers victims of the Nice attacks the opportunity to exchange with survivors of other attacks, such as that of November 13, 2015 in Paris - whose trial has already taken place. -, in order to discuss the expectations and difficulties related to such a media event. "We create discussion groups before and during the trial. This is important, because many victims are afraid of being isolated, of not being able to debrief", explains Karen Pilibossian, legal manager of the Nice branch of the 'AFVT.

Sometimes, the misunderstanding of legal terms or the vagueness of the course of the trial also worries the victims. Julien Spella, psychologist and member of the association for helping victims Montjoye, tries to respond to these anxieties. "We often hear the same questions: 'Am I going to be able to talk, and to whom? What am I likely to hear? What are they likely to show me, and who show it to me? We're working on that," he said. For minors, the association also offers discussion groups, and has even produced a booklet in the form of a comic strip to explain to children how justice works. "A digital platform has also been put in place, which looks a bit like a video game. They can take ownership of the place of the court, understand who the main actors are, the lawyers, the magistrates... It helps".

But despite this preparation, the confrontation remains tough for some victims. While the perpetrator was killed by the police on the evening of the attack, the responsibility of seven men and one woman, aged 27 to 48, is being examined by the magistrates of the special assize court. Three defendants are notably prosecuted for "terrorist association of criminals". "Monday September 5, we were able to see the famous defendants. What shocked me was that some of them had a smirk", says Jean-Claude Hubler, who nevertheless assures "not to have felt any anger". "It's a pity that the main culprit is not there, we would have liked him to be held accountable. But what is important for me now is to know more about the level of involvement of the defendants, and discover the personality of the terrorist himself".

For Asma Guemifi, these hearings also have a symbolic role for the victims. “Even if the main culprit is not there, this trial allows a certain recognition of justice, of the State, of society as a whole: yes, you have been a victim, and this cannot go unpunished. so, it allows some repair". For Damien Scolari, the notion of "end" is also important. "Many victims find that six years is a long time. There is this idea of ​​speaking for those who can no longer speak, of being listened to, of closing something with this trial", he analyzes. . "But beware: this does not mean that at the end of the trial, there will be oblivion. Places will allow people to gather, tributes will take place, but the attack will symbolically belong to the past". Jean-Claude Hubler, he remains categorical. "We will be victims for life, but I don't want that label sticking to our skin. I'm still here, I'm alive, and I will continue."