Influenza: all you need to know about the vaccination campaign which begins this Tuesday

Fever, sore throat, body aches? Fall and the onset of winter are usually synonymous with the return of seasonal flu. 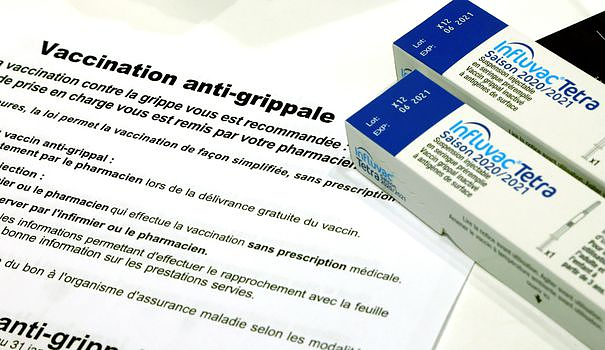 Fever, sore throat, body aches? Fall and the onset of winter are usually synonymous with the return of seasonal flu. This viral infection affects between two and six million people in France each year according to the Ministry of Health and causes around 10,000 deaths. In order to protect vulnerable people, France is launching its traditional vaccination campaign this Tuesday, October 17. The health authorities thus hope to avoid a heavy epidemic in a health context already marked by a wave of Covid-19. "There is every interest in getting vaccinated quickly for people at risk," warned immunologist Jean-Daniel Lelièvre in early October, during a press briefing from the ANRS, the public agency for the fight against infectious diseases.

From this Tuesday, the targeted people can therefore be vaccinated against the flu free of charge, from a doctor, a pharmacy, a nurse or a midwife. The patients targeted are essentially those over 65, pregnant women, severely obese (BMI greater than 40) and patients with certain chronic diseases such as diabetes. The vaccine will be reserved for them until November 15, then all French people will be able to benefit from it, but at their own expense if they are not part of this panel (the price is generally around 8 euros).

Currently, the flu is limited to a few sporadic cases in France and, while it is impossible to know what scale the epidemic will take, several experts are already anticipating a difficult year. "There are several reasons", detailed Jean-Daniel Lelièvre, referring in particular to the data from the countries of the southern hemisphere, including Australia: the influenza epidemic, which takes place there before the countries of the North, resulted in fairly severe symptoms.

Concerns also come from the context linked to the Covid-19 pandemic. After almost three years, "we use the mask much less, we pay less attention", underlines the immunologist. Another negative element, last year, in a blurred context by the launch of a booster vaccination campaign against Covid: barely more than half of eligible people were vaccinated against the flu. “So immunity tends to drop in the general population,” concludes the expert.

This year, the authorities are again challenged with double vaccination against influenza and Covid. However, in addition to people between the ages of 60 and 65 who are concerned by anti-Covid and not anti-influenza vaccination, the people targeted largely overlap. The number of doses should not be missing. Production is indeed “far higher than demand”, according to the French giant Sanofi, which supplies around half of the vaccines in the country.

The risk rather concerns a lack of clarity at the level of the articulation between the two vaccinations: instead of a joint launch, the anti-Covid campaign began at the beginning of October. In question, the emergence at the start of the school year of a new wave of Covid, which prompted the health authorities to hurry. Why, then, not advance the campaign against the flu? “If we start too early, (…) we take a risk that people will not be covered if we have a late flu epidemic”, we explain to the Ministry of Health. However, last season, the influenza epidemic was precisely exceptionally late: it peaked at the beginning of spring and not, as usual, at the turn of the new year.

Beyond vaccination alone, the authorities are trying to articulate a discourse that encompasses the fight against the two diseases, at a time when the current wave of Covid is meeting relatively little media coverage despite hospitalizations and deaths on the rise. “We must not trivialize” the Covid, insisted Thursday the Minister of Health, François Braun, to AFP. "You also have to protect against the flu. That's good, barrier gestures protect against both."