Inflation is slowing in the United States, it will take time, warns Biden 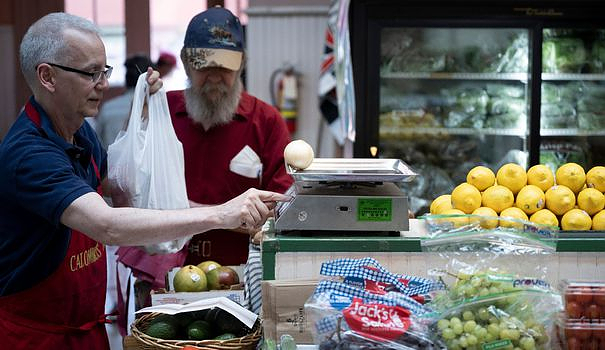 Consumer prices rose 7.7% in October from October 2021, according to the benchmark CPI index, released Thursday by the Labor Department.

This is a less strong increase than that of 8.2% which was recorded in September over one year. And it is also less than the 7.9% expected by analysts, according to MarketWatch consensus.

The signal is positive over one month as well, with prices rising by 0.4% compared to September, the same increase as that recorded between August and September. This is a good surprise, since analysts were expecting an acceleration, to 0.6%.

These figures show "progress" but "it will take time to see inflation return to normal levels - and we could experience setbacks along the way," Joe Biden said in a statement, two days after the mid-term elections. -mandate.

Inflation was one of the main themes in the campaign. The Republicans, first, seized on the subject of inflation, implicating President Joe Biden in this soaring price.

The Democrats, in a hurry to catch up with their competitors on this ground which has become the main concern of the Americans, seized it in the final stretch.

The final results of the ballot are still pending, but the House of Representatives could pass into the hands of the Republican opposition, while control of the Senate remains uncertain.

"We've learned over the past 18 months that a month of good inflation doesn't prove anything, but we see good reason to believe this report is the one," said Ian Shepherdson, economist for Pantheon Macroeconomics.

But "the fever seems to be falling for housing rentals, a few months earlier than we expected", he however underlined.

Housing accounts for a large share of inflation, both for renting and for buying.

Real estate prices have soared during the Covid-19 pandemic, fueled by historically low interest rates and the remoteness of cities enabled by telecommuting.

The median price for a single-family home rose 8.6% in the third quarter, compared to the same period last year, according to data from the Association of Realtors (NAR), also released Thursday.

This slowdown in price growth could be a sign that the measures taken by the US central bank, the Fed, to bring inflation back into line, are finally starting to bear fruit.

It is indeed the powerful Federal Reserve that has the heavy task of bringing price increases back to around 2% over one year, a level considered healthy for the economy. However, it favors another measure of inflation, the PCE index, which remained stable in September at 6.2% over one year.

To slow down inflation, the Fed is seeking to provoke a voluntary slowdown in American economic activity, by raising interest rates, which should discourage household consumption and thus ease the pressure on prices.

And the health of the job market is seen as a gauge of the effectiveness of these measures. The unemployment rate should go up a little.

Companies, however, "are choosing to slow the pace of hiring in response to tighter financial conditions and weaker demand, rather than laying off existing staff," said Ian Shepherdson.

In October, the unemployment rate rose by 0.2 points to 3.7%. But job creations, although less strong than in October, remained solid.

Faced with the persistence of inflation, the Fed announced on November 2 a new increase in its key rate, the sixth in a row. This, raised by 0.75 percentage point - a sharp rise - is now located in a range of 3.75% to 4.00%, its highest level since January 2008.