Inflation devours potatoes from Peru and corn from Mexico

More than a product, "papa" in Peru and corn flour in Mexico represent a link with the pre-Hispanic past of both countries, and an indicator of galloping inflation. 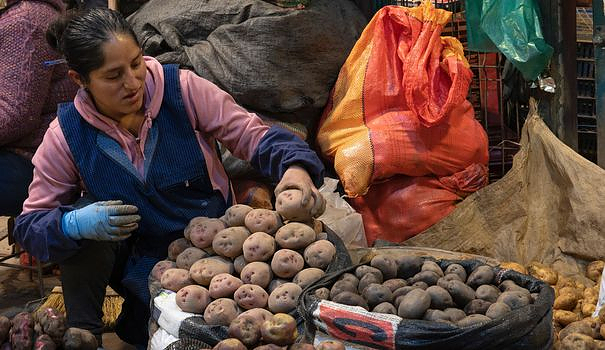 More than a product, "papa" in Peru and corn flour in Mexico represent a link with the pre-Hispanic past of both countries, and an indicator of galloping inflation.

Each Peruvian eats an average of two kilos of tubers per week. And 98.4% of Mexicans eat tortillas, small pancakes made from corn flour which are made, among other things, into tacos with fillings of meat, sauce, pepper, vegetables, garlic and onion.

In Lima, the price of potatoes has tripled since the Russian invasion of Ukraine and its cascading economic consequences, according to the Peruvian Ministry of Agriculture. Much more than inflation (6.13%).

"Sales are very bad," laments Sonia Alanya, a shopkeeper met by AFP at the Santa Anita market in Lima.

The yellow potato, the most common, is worth two dollars per kilo against 0.6 dollars previously, unaffordable for many inhabitants of the capital.

The white, used for broths and soups, buys 0.75 dollar per kilo, twice as much as before the war in Ukraine.

"We are all concerned about the rise," says another trader, Sonia Yangale, 39. "The dad is important, it's like the air".

- Before the Incas and the Spaniards -

A Peruvian family must devote 60 dollars per month to the potato budget, compared to the 376 dollars of the average salary in urban areas.

There is no other solution than to "reduce consumption", sighs Lucia Adrianzén, a 69-year-old housewife. "We have to look for alternatives," adds Martha Guerreros, 61, who cites dishes made with beans or lentils.

The authorities are worried about the lack of fertilizer, of which Russia is a major exporter. Left-wing president Pedro Castillo called for respect for "the right to food" and the resumption of exports of Ukrainian wheat and Russian fertilizers.

The culture of the "papas" existed before the Inca Empire in the 15th century, just as corn was the symbol of the Mesoamerican peoples of present-day Mexico.

In the south of the Mexico City capital, Laura Flores, 39, continues to cultivate and harvest the yellow cobs in her "milpa" (small plot) without fertilizer, like her ancestors.

The system of "milpa" and artisanal mills resists inflation better than industrial production. But this traditional model is insufficient to feed 126 million Mexicans (the country produced 27.4 million tons of corn in 2021).

Many tortilla producers depend for their corn flour supply on industrial companies like Maseca and Minsa which are listed on the stock exchange.

It is this industrial sector that has been particularly affected by the consequences of the war in Ukraine, with direct repercussions on the price of the tortilla.

The kilo thus went from 0.94 dollar to 1.05 dollar between January and October, with peaks at 1.25 dollar in certain states of the North-West (Sinaloa, Baja California).

The rise in food prices is one of the causes of inflation (8.7% over 12 months in September, a record in 20 years).

To curb inflation, President Andres Manuel Lopez Obrador has just signed a second agreement with the private sector, including the two giants Maseca and Minsa, providing among other things for a freeze on the price of flour.

Small corn producers are also exposed in southern Mexico to the threat of galloping urbanization, combined with the low profitability of crops.

"There are many producers who sow, but who have no return on investment. They tell themselves that it is better to sell", regrets Laura Flores, who sees from her "milpa" the constructions of Mexico City and its nine million people.

"A few years ago, Mexico was self-sufficient in terms of beans, corn. Not anymore," she laments.