Indonesia: investigation into police after the deadly stampede in a stadium

In the face of public anger, the first sanctions fell on those found responsible for the deadly stampede in the football stadium in Malang (East Java) when the police began to send large quantities of tear gas to control the crowd , according to witnesses. 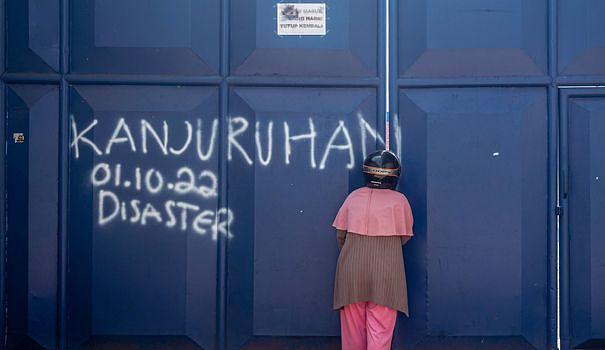 In the face of public anger, the first sanctions fell on those found responsible for the deadly stampede in the football stadium in Malang (East Java) when the police began to send large quantities of tear gas to control the crowd , according to witnesses.

Supporters of local club Arema FC set up a center in Malang on Monday to collect complaints and announced they intended to prosecute police officers found responsible for targeting spectators trapped in the stands at random.

"If there were riots, the tear gas should have been aimed at the field, not at the stands," Danny Agung Prasetyo, supporters' coordinator for the Arema DC group, told AFP.

"There were many victims among those who were in the stands. They panicked because of the tear gas".

According to a supporter present at the center created in Malang, fans of the Arema FC club will organize a large rally if no suspect is identified before the weekend.

The suspended officers belonged to the Mobile Brigade (also called Brimob), a paramilitary unit of the police in special operations, known for its aggressive methods in crowd management.

The government has suspended all matches in the national premier league and announced the launch of an investigation into the tragedy. It could last two to three weeks.

The stands at Kanjuruhan Stadium in Malang were filled with thousands of young "Aremania" supporters of Arema FC who came to watch their side play against rival Persebaya Surabaya from the nearby town on Saturday night.

But after their side lost 3-2, the first in decades, fans took to the pitch to address the players and management.

Police tried to control crowds on the pitch by force, with batons, according to witnesses and video footage, but this encouraged more supporters to come and lend a hand to those already on the pitch.

Calls for an independent investigation grew as details of the bloody evening from Saturday to Sunday emerged.

"There is no directive to fire tear gas and (...) to close (the doors)", explained Tuesday in a press conference Albertus Wahyurudhanto, member of the Indonesian Commission for Human Rights (Komnas HAM ).

In a sign of fans' anger, carcasses of burnt-out police vehicles were visible outside the stadium and numerous graffiti appeared criticizing the police. “Our friends died here”, assures one of them.

New funeral vigils were planned for Tuesday after the laying of flowers and petals the day before in front of the stadium in tribute to the victims.

The health ministry said all the victims had been identified. He identified 68 seriously injured and 219 people with minor injuries.

Violence in Indonesian football has been a long-standing problem and fans of the Persebaya Surabaya club had been banned from this game.

But supporters claim not to be the cause of the tragedy.

Indonesian officials said more tickets than expected were sold and, according to witnesses, some doors remained closed at the time of the stampede.

The strongest spectators were able to climb barriers and thus manage to escape the movement of the crowd, but the most vulnerable, including women and dozens of children, did not survive the pressure of the crowd and the tear gas.

"The doors were closed, that's why people were pushing", while some took refuge in the corners, a 16-year-old survivor told AFP.

"In the stands, some were hit directly" by tear gas. "I saw it myself".

This tragedy is the worst ever recorded in an Indonesian stadium.

"You could see that something bad could happen. That's the kind of fear you have when you go to see a match here," Pangeran Siahaan, an Indonesian football expert, told AFP.

"There are a lot of dangers every time you go to a football stadium in Indonesia."