Post a Comment Print Share on Facebook
Famagusta
DOLLAR 18,84
EURO 20,20
GOLD 1.137,83
BIST 4.186,01
The state of NRW has to burn millions of masks and van Laack smocks
"That's the only thing I want - drugs"
How Goethe plunged his son into misfortune
"America will soon be in civil war"
Here you can now get funding for the renovation
"It's not just about having sex, it's about much more"
The "Komet" brought Udo Lindenberg his first number 1 hit
Fall and demolition after an abstruse jump to 161.5 meters
"I felt like my heart was being ripped out"
What you should now know about organ donation

Indonesia: evacuations continue after the eruption of the Semeru volcano

A total of more than 2,400 people fled their homes to find refuge in 11 centers following the eruption of this volcano, which is the highest peak on the island of Java, on Sunday morning. 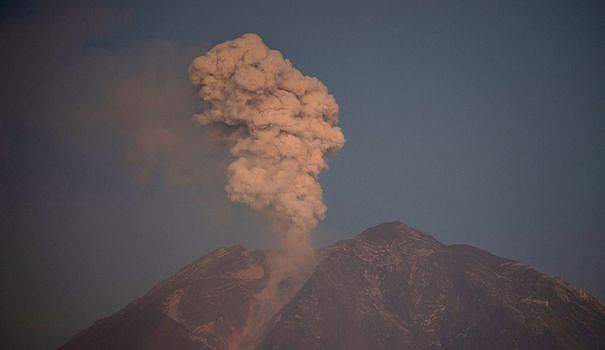 A total of more than 2,400 people fled their homes to find refuge in 11 centers following the eruption of this volcano, which is the highest peak on the island of Java, on Sunday morning.

"The army, police, and emergency services continue to evacuate people from the village of Curah Kobokan, where clouds of hot ash and cold lava may arrive," said Abdul Muhari, the spokesman for the Indonesian Disaster Management Agency.

"Now there are 2,489 evacuees," he told a local television station.

A state of emergency was declared for two weeks, the population received masks to protect themselves from the ashes in the air and collective kitchens were set up to feed the evacuees.

On Monday morning, dozens of people who had urgently left their homes in Lumajang district returned to take their most precious possessions, before going back to shelters, noted an AFP journalist.

Some went to look for their cattle, others carried television sets or refrigerators while, behind them, the volcano continued to project a little ash.

Semeru was showing less activity on Monday, according to Abdul Muhari, but he warned of the risk of rain-cooled lava flows.

"What worries us are certain activities like (those in) the sand pits. We want to make sure that the path of the clouds of ash and cold lava is completely clear."

Authorities on Sunday raised the alert level around Semeru from level three to level four, the highest. It had been raised to three last year during a previous eruption.

Almost exactly a year ago, on December 4, 2021, Mount Semeru had already erupted, killing at least 51 people.

Mudslides and ash engulfed villages and nearly 10,000 people had to flee their homes.

Many victims were workers who exploited sand quarries on the slopes of the volcano.

Indonesia sits on the Pacific Ring of Fire, where the meeting of continental plates causes strong volcanic and seismic activity.

This Southeast Asian archipelago has about 130 active volcanoes.