Authorities have warned that the rubble must be cleared urgently around the town of Cianjur, the most affected by the earthquake, to prevent flash floods or mudslides which are likely to be triggered by the heavy rains expected these days. 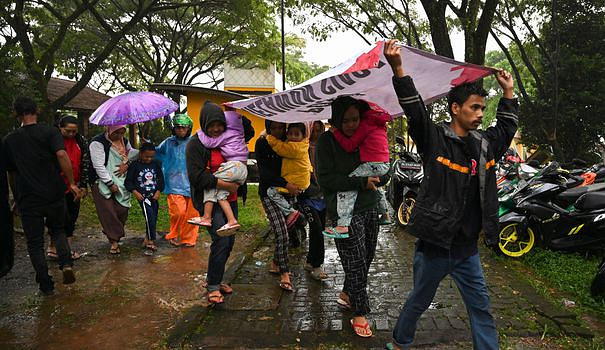 Authorities have warned that the rubble must be cleared urgently around the town of Cianjur, the most affected by the earthquake, to prevent flash floods or mudslides which are likely to be triggered by the heavy rains expected these days. next days.

A 5.6 magnitude quake hit the province of West Java, the most populous in the Southeast Asian archipelago, on Monday. The latest assessment of the disaster reports 268 dead, a thousand injured and 151 missing.

But heavy rains and new aftershocks of the earthquake slowed Wednesday the search for survivors in a dozen villages where more than 20,000 houses were destroyed.

An aftershock of magnitude 3.9, strongly felt, triggered the panicked flight of displaced people from their shelters on Wednesday morning, AFP journalists noted.

Two villages, among the most remote, still remain isolated, explained Henri Alfiandi, head of the emergency service in a video posted on social networks.

"People there can't even call for help," he said, noting that three helicopters were sent in to help.

Villagers remain trapped without water or electricity, and some have to sleep next to their dead, he reports.

In localities closer to Cianjur, residents are trying to salvage family photos, religious books and marriage certificates from the ruins two days after the disaster that destroyed their home.

"We had food aid, but it's not enough. We have rice, instant noodles, mineral water, but not enough," Mustafa, 23, a resident told AFP. from the village of Gasoline.

He digs through the rubble of his elderly neighbor's house, at her request. Returning with a pile of clothes, he leaves to collect rice, a gas stove and stoves.

"We have no clothes and we haven't changed for days," he said.

"We need help" call for signs placed in front of damaged houses and tents in the village of Talaga.

More than 58,000 people have been displaced by the quake, the disaster management agency said on Tuesday.

The government has deployed several thousand soldiers and police and is providing food aid and tents, but the needs are immense.

On site, everything is missing, explains Yunisa Yuliani, a 31-year-old resident.

"My child has a fever and cannot eat. There are a lot of old people here and children. The children need milk, nappies, food and medicine," she said.

Residents of Cianjur began burying their loved ones according to Islamic rites after being allowed to collect the remains from morgues.

Amid the disaster, an earthquake-affected couple found hope on Wednesday.

Mimin, 52, and her husband Rosyid, 67, were digging through the rubble of their home in the hope of finding their most prized possession: a two-gram gold ring.

They first extracted clothes from the debris, patted them and shook them, until they saw the shiny jewel that is all they had left.

“Thank God! I found the ring!” shouted Mimin with joy.

Authorities have warned of the risk of another natural disaster. During the rainy season, which began and will peak in December, the archipelago is prone to landslides and flash floods.

However, the weather services announce storms, potentially dangerous after an earthquake.

"We need to be vigilant about a potential second natural disaster, such as a landslide," warned Dwikorita Karnawati, head of the meteorology, climatology and geophysics agency.

"We must urgently clear the materials and debris that are clogging the waterways in the highest hills."