India: Rahul Gandhi on the march to revive his party in decline

Before his "long march", the ex-congress leader gathered in Sriperumbudur, in the southern state of Tamil Nadu, where his father, former Prime Minister Rajiv Gandhi, was assassinated by a suicide bomber in 1991. 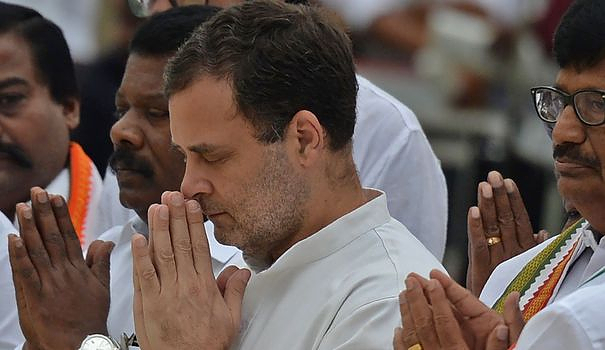 Before his "long march", the ex-congress leader gathered in Sriperumbudur, in the southern state of Tamil Nadu, where his father, former Prime Minister Rajiv Gandhi, was assassinated by a suicide bomber in 1991.

"I lost my father to policies of hatred and division. I will not hand over my beloved country to them as well," said Mr Gandhi, 52.

He must walk to Kanyakumari, at the southern end of the country, the first stage of his journey of 3,500 kilometers through the vast Indian territory which he hopes to cover in 150 days. However, it is not certain that he will complete the entire route on foot.

The political leader is accompanied by hundreds of party members and is to be joined by his supporters on the journey to Indian-administered Kashmir, the last leg of the journey.

This great-grandson, grandson and son of three former Prime Ministers of the largest democracy in the world promises to denounce, along the way, the difficulties of the population confronted with poverty, unemployment and inflation.

Mr. Gandhi's initiative echoes the "salt march" of his famous namesake Mahatma Gandhi, Indian independence hero, who walked 380 km on foot in 1930 to protest against the tax on salt, initiating a movement of civil disobedience to British colonial power.

On Sunday, Rahul Gandhi, an ardent defender of secularism, attacked religious polarization, which has been exacerbated under the influence of the Bharatiya Janata Party (BJP), the Hindu nationalist party of Prime Minister Narendra Modi's government.

"I want to ask you if rising prices or hatred strengthens the country (...). Narendra Modi and the BJP weaken the country", launched Rahul Gandhi during a public rally Sunday in New Delhi. "The Congress party, on the other hand, brings the country together. We take out the hate, and once the hate is taken out, the country moves faster."

Nicknamed the "Grand Old Party", the Congress, which wants to get back in the saddle by the next national elections scheduled for 2024, has held power for most of the time since India's independence in 1947.

But it now only governs two out of 28 states and is part of a ruling coalition in four others.

Rahul Gandhi, described as an "empty suit" in leaked US diplomatic cables in 2005, chaired Congress from 2017 until his election debacle in 2019. Since then, his mother Sonia Gandhi, 75, , widow of Rajiv, assumes the interim presidency.

The BJP soundly defeated Congress in national elections in 2014 and 2019 and appears almost invincible, judging by the results of regional elections conducted this year in four states, including the great state of Uttar Pradesh, which is considered the barometer.

The Congress must restructure its foundations, in a political landscape dominated by the BJP which draws on the ideology of Rashtriya Swayamsevak Sangh, a supremacist organization advocating Hindutva, Hindu hegemony.

According to political analysts, he failed to deliver a narrative of unifying resistance to Mr Modi's religious nationalism.

"The idea of ​​the march reflects the position of Congress, which advocates the need for social harmony against the rhetoric and agenda of Hindutva," analyst Parsa Venkateshwar Rao Junior told AFP.

"It's not an artifice", he believes, "Rahul Gandhi sincerely believes in religious harmony. But people are not interested".

Hindus account for 80% of the country's 1.4 billion people. Muslims are only 200 million.

"Rahul and the Congress should work hard on the ground, confronting the difficulties that people all over the country are going through," Rao added. "They need a voice to make their discontent heard."