In this tiny town in the American West, the public vibrates to the rhythm of the hoof kicks launched by one of the horses against a white fence. 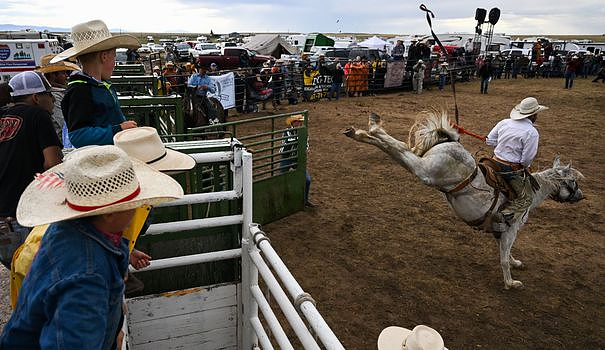 In this tiny town in the American West, the public vibrates to the rhythm of the hoof kicks launched by one of the horses against a white fence.

The barrier opens, the haggard stallion tumbles into the arena.

Planted on the saddle, a cowboy perilously tries to hold on with one hand while the wild animal kicks and rears. A single objective: not to be disembarked for at least eight seconds. Dozens of valiant attempt to repeat the feat, the falls are numerous.

"That one must have hurt a lot. He's going to need a little help," the host launches into his megaphone when one of the men finds himself facing him, all four irons in the air.

It was after a fall and a serious knee injury that the young man, passionate about horses since his adolescence, began taking Oxycontin, a highly addictive painkiller opiate prescribed by doctors.

The beginning of a gear. Each new injury, an integral part of a cowboy's life, means new treatments.

"They kept prescribing it to him until at some point he couldn't live without it," says his father, Don Beer. "It got us to where we are now, honoring the memory of my son who passed away."

On October 31, 2021, the cowboy, father of three little girls, died of an overdose of fentanyl, a synthetic opiate up to 50 times more powerful than heroin. He was 29 years old.

“Some people are attracted to horses because they help them overcome everyday difficulties,” explains his father. "Jonn was one of them: the more horses he was around, the better he felt."

His ashes were spread in the rodeo arena on Saturday, placed on the saddle of the last horse he rode. With a kick of the hoof, they dispersed in a cloud.

"We often have to deal with stories of cowboy friends or relatives who have committed suicide or who have succumbed to drug or alcohol addiction," breathes the 30-year-old, organizer of the rodeo in tribute to his sidekick.

In this state, where the cities are more than 150 km apart, where the weather is hostile and the telephone network almost non-existent, the watchword has always been to "get up like a cowboy" in the face of the vagaries of the daily.

“We cowboys are supposed to be strong, we are taught to be independent and not to rely on anyone,” he says, tears in his eyes. "We don't necessarily have this facility to communicate, to talk about our emotions."

After Jonn's death, Rand Selle created a group to free speech on addiction and suicide in this very masculine environment. The association was baptized "No More Empty Saddles".

The group enjoys notable success on Facebook, where several cowboys have begun to give their testimonies.

“It is completely normal to have negative emotions, it is what makes us human and distinguishes us … from a horse”, underlines Sheryl Foland, the person in charge of mental health issues for the association.

The entourage of this health professional with the long blond braid was not spared from the tragedies of addiction and suicide. "I grew up with an alcoholic father," she says. “My father was in rehab when my brother died” by suicide.

"You never know who's going to get hooked," says Sheryl Foland. "But until we talk about it, we won't move forward."

To "end unnecessary deaths", this woman, who sparkles with energy, distributes from her trailer padlocks to neutralize firearms, the main means of suicide in Wyoming, and boxes that lock to store drugs addictive to rodeo participants.

The day before, a cowboy knocked on his door. "He just needed a place to talk."