In Transylvania, pilgrimage to lands dear to Charles III

For the pensioner Ion Stoica, who comes to cycle there regularly, the frequent visits of the one who was still only heir to the British throne saved from "oblivion" this hamlet of 400 souls, dominated by a church fortified UNESCO World Heritage Site. 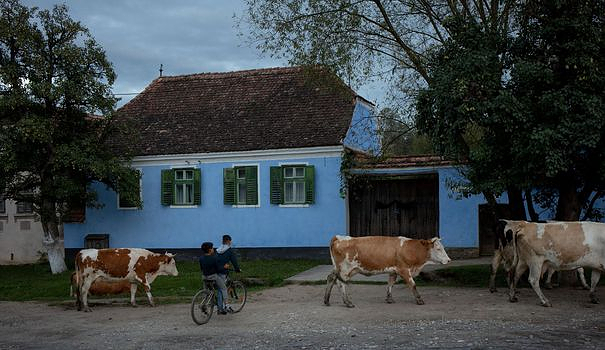 For the pensioner Ion Stoica, who comes to cycle there regularly, the frequent visits of the one who was still only heir to the British throne saved from "oblivion" this hamlet of 400 souls, dominated by a church fortified UNESCO World Heritage Site.

Every year, tens of thousands of tourists discover the timeless atmosphere of the place where bed and breakfasts have grown, an interest that contrasts with the abandonment and exodus characterizing the Romanian countryside.

"Now small houses are selling for more than 40,000 euros!" Exclaims this former sports teacher from a neighboring town - a fortune in this country among the poorest in the European Union.

A resident, seated on a bench, grumbles: royal honors "did not bring prosperity" to the inhabitants, he breathes.

If opinions are divided, all agree on the restoration efforts undertaken under the leadership of Prince Charles.

The now sovereign would have, in his own words, "Transylvania in (his) blood". He prides himself on being a distant relative of a 15th-century Romanian bloodthirsty prince known as Vlad the Impaler - who inspired the character of Dracula to Irish writer Bram Stoker.

After his first visit in 1998, this convinced ecologist, nature lover, became an ardent protector of these villages in the heart of Romania founded in the 12th century by Saxon settlers.

Between the ravages of the regime of the former communist dictator Nicolae Ceausescu and the negligence of the local authorities, many of them were condemned to disappearance before the mobilization of Charles.

He bought his first house in Viscri in 2006. Initially an occasional princely residence, this bright blue building, known to everyone here, has been transformed into a small museum dedicated to botany, another passion of Charles.

"His Majesty the King has not stayed here for a few years but he has left many traces," Caroline Fernolend, president of the Mihai Eminescu Trust in Romania, told AFP.

This organization, first intended to support Romanian intellectuals under communism, is now dedicated to the protection of the Transylvanian heritage.

Several heritage rehabilitation projects have emerged on the initiative of the king, sponsor of the foundation for 14 years, details Ms. Fernolend, citing the renovation of several properties with traditional methods and materials.

"He also financed an ecological wastewater treatment plant based on reeds and a new water drainage system for the village, without advertising it," she says.

"Everything is so simple here, so calm, we don't find this atmosphere anywhere else in the world and we understand why the prince fell in love with it," smiles Ana Maria Plopeanu, 35.

This Romanian, whose grandparents are from Transylvania, works in Dubai and introduces her companion to the area.

It is 100 km further west, at the end of an unpaved and difficult to pass road, that King Charles now puts down his suitcases, in the town of Valea Zalanului.

Under a black veil affixed to the gate as a sign of mourning, a sign prohibits access to the curious but Steffie Lambert Babianskas, 37, and her mother Angela, 70, who have specially made the trip from London, sneak in inside the domain.

In a large garden maintained with care, stand stone buildings also serving as guest houses with evocative room names, from "valet" to "prince".

"Coming here, the road was so bumpy that I wondered if we had taken the right path," jokes Steffie.

After the accession to the throne of Charles III, these two Britons decided to go on pilgrimage to the places dear to the new sovereign.

Soon they will be heading back to London, just in time to attend the funeral of the late Queen Elizabeth II.