In town or in the countryside, the astonishing success of the national collection of undeclared weapons

His grandmother had discovered the weapon, rusty and obviously unusable, "while digging a hole in his garden in the Landes (south-west) about ten or fifteen years ago", says Nicolas, 36, who wishes to remain anonymous. 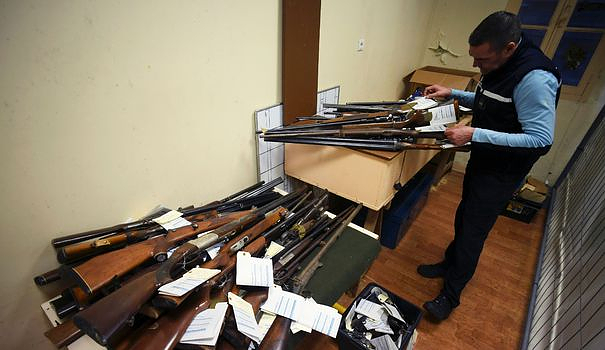 His grandmother had discovered the weapon, rusty and obviously unusable, "while digging a hole in his garden in the Landes (south-west) about ten or fifteen years ago", says Nicolas, 36, who wishes to remain anonymous.

She had never mentioned it again and it was while putting away her things after her death a few months ago that Nicolas had come across it. Without knowing what to do with it.

The national operation to abandon - or register - illegal weapons, coordinated by the Ministry of the Interior until December 2, came at the right time. Without her, getting rid of the gun "would not have been one of the priorities", recognizes the young man.

Especially since in Paris or in its inner suburbs, there is no need to travel. To prevent too many weapons circulating in town, it is the police who do it. In this case, at the home of Nicolas' late grandmother, two officials from the administrative police unit (UPA) of the 20th arrondissement police station.

The usual checks made, they give the young man a "simplified weapon abandonment form" then leave with the gun. It will go to a secure cabinet in the police station before being destroyed.

The stakes are high. In France, five million individuals legally own firearms but there are "five to six million undeclared weapons", explains Jean-Simon Merandat, head of the Central Service for Weapons and Explosives (SCAE) of the Ministry of Interior.

More often than not, these are legacy weapons. Stored "in the cellar, in the attic or in a closet", they are "often unsecured", therefore dangerous and sources of domestic accidents.

"The second issue (of this operation) are thefts. Eight thousand weapons are stolen each year in burglaries", continues Jean-Simon Merandat, who also evokes the fight against intra-family violence.

First in France, the campaign surprised by its success. As had been a similar campaign targeted in Martinique in 2014.

For its first day, Friday, the tiny room of the police headquarters centralizing Parisian calls resounded with the uninterrupted noise of telephone ringtones, to the point that a third operator had to be hastily added.

Same observation in the provinces. "It's a success that we did not expect. We doubled, then tripled the workforce", assured Tuesday the delegate prefect for defense and security in the Rhône, Ivan Bouchier, during a trip to the central police station of Lyons.

In the Lyon premises, around forty people are waiting, mostly elderly men. Among them Eric Jarillot, 62, who had already come on Saturday but had then turned around: "Too many people".

He pulls out of his bag an antique rifle that looks like a musket... "It must date back to at least the Civil War, I was not born the last time we fired it, that's for sure! It was in the country house of my in-laws", he laughs.

In rural areas, the campaign is carried out with more flexibility: everyone can move around with their weapon, heading for police stations or one of the 300 sites open in France for the operation.

At the Cahors (Lot) police station, Julien Ilbert, a 42-year-old winemaker, came to declare his shotgun. “I got it from my grandfather. He gave it to me, with my father, when I was 16. Until now, it was in a corner of the house gathering dust. don't use it but would like to keep it for sentimental reasons", he explains.

Jean Sablayrolles, a 74-year-old retiree, stayed for a few minutes in the airlock of the police station with a shotgun he wanted to get rid of, wrapped in a blanket.

"The gun belonged to my grandfather. It hasn't been used for 50 years. I got it when I moved house. Since then, it's been more of a burden for me than anything else," he said afterwards. to lay down the weapon.

A hundred kilometers to the east, at the police station in Rodez (Aveyron), the police officers thought they were "recovering a lot of old rifles" but had, from the first day of the operation, "registered several handguns", according to Lilian Kinache, commander in charge of communication.

Monday, Jean-Simon Mérandat advanced the figure of 21,000 weapons abandoned and 600,000 ammunition recovered after three days of operation, to which are added more than 6,000 weapons put in order.