In Toulon, members of the PJ "in mourning" mobilized against the reform of Darmanin

Executives and unions of the PJ are upwind against the reform of Gérald Darmanin which aims to put all the police services at the departmental level under the authority of the same Director of the National Police (DDPN), dependent on the prefect. 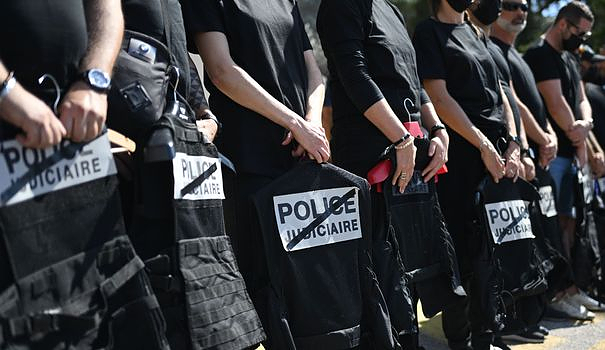 Executives and unions of the PJ are upwind against the reform of Gérald Darmanin which aims to put all the police services at the departmental level under the authority of the same Director of the National Police (DDPN), dependent on the prefect. They see in it a risk of diluting the means and skills of the PJ, as well as its independence from the executive.

Echoing the actions carried out since the beginning of September, particularly in Bordeaux and Nancy, a black coffin bearing the PJ crest was placed in front of the gate of the Var prefecture on which about fifty vests crossed out with a black band in sign of mourning were hanged. A minute of silence was also observed by the police officers present, who came from the services of Toulon, Marseille and Montpellier.

Against the risk of "death of the judicial police", the CGT Police delegate in Toulon, Christophe Olivieri, warned the ministry, in front of the demonstrators, including some lawyers who came to support them.

“We want to keep our delocalized and zonal command which allows us real independence in our investigations at the service of magistrates and citizens,” he claimed.

Representative of the National Association of the Judicial Police (ANPJ), an "apolitical" association created in August in opposition to the reform, Nathalie, divisional commissioner in Montpellier fears that the PJ will be "totally diluted" in the other services and that s followed by "a loss of expertise".

"Our core business is to carry out high-level crime investigations," she explained, adding that "we do not want in ten years to be forced to rebuild a judicial police" after a finding of failure.

The national secretary of the CGT Police, Anthony Caillé, was worried about the "separation of powers": a "windfall effect induced by this reform", according to him driven by the desire to "save money" is to "muzzle the judicial police", currently protected "from the pressures of power by a distant management" of the political and administrative authorities.

After a first meeting three weeks ago between Gérald Darmanin and the executives of the judicial police, the two parties should discuss again at the beginning of October.