In the West Bank, scenes of urban guerrilla warfare between Palestinians

Tuesday morning, the shops had lowered their curtains in the Old City in the grip of clashes with the scent of urban guerrilla warfare. 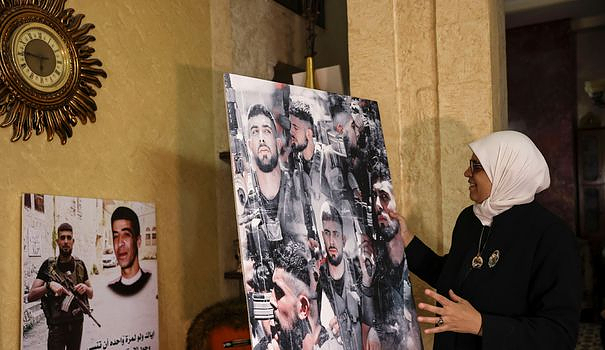 Tuesday morning, the shops had lowered their curtains in the Old City in the grip of clashes with the scent of urban guerrilla warfare.

At issue: the arrest of Mussab Shtayyeh, a young and fashionable leader of the Islamists of Hamas, a rival movement of the secular Fatah of President Mahmoud Abbas, not by Israeli forces, but Palestinians.

On the spot, hundreds of excited young Palestinians threaten the few journalists, fearing that their images will allow the authorities to apprehend them later.

In a tower overlooking the fighting but in the hollow of this city of nearly 200,000 inhabitants all in hills, the exterior windows of the studios of al-Hayat radio and public television Palestine TV are riddled with bullet holes.

"There are deeper reasons for these clashes than Mussab Shtayyeh," notes a Palestinian journalist on site who requested anonymity.

"These young people are neither Fatah nor Hamas nor Islamic Jihad, they are young Palestinians of a new generation who do not fall under anyone's thumb and who are angry at both Israel and the Palestinian Authority," he added. he.

"Israel and the Palestinian Authority, it's the same software", adds in the street Mohammed Mhawe, protester who listens to hip-hop slaying the "collaborators" of the PA and paying tribute to the "hero of Islam" Ibrahim al-Nabulsi.

In the wake of a wave of anti-Israeli attacks in the spring, which killed 20 people, Israeli forces stepped up raids in the northern West Bank, particularly in Jenin, where the perpetrators of certain attacks were from. but also in Nablus.

These two towns are located in Area "A" of the West Bank, Palestinian territory occupied since 1967 by Israel, where security is normally the prerogative of Palestinian and non-Israeli forces.

In Jenin, more than 30 people were killed and 200 injured in around 500 operations, compared to around 20 dead, 2,000 injured and 900 raids in Nablus, according to data obtained by AFP from international organizations. A total of 95 Palestinians have been killed this year in clashes in the West Bank, the highest death toll since 2016, according to the data.

Implicit to these tensions, Ibrahim al-Nabulsi, an 18-year-old fighter, united hundreds, even thousands, of young Palestinians with his strong rhetoric against the Israeli forces and his call to unite the "resisters" beyond the factions.

On social networks, including Tik Tok, accounts of young Palestinians paying tribute to Nabulsi, nicknamed the "lion of Nablus" and killed in an Israeli raid in early August, have swarmed in recent months.

In the souk, traders sell effigies, bracelets and pendants adorned with the photo of Nabulsi, square jaw, charcoal beard and M-16 assault rifle in hand.

"When he was younger, Ibrahim was gentle. He loved design and decoration, but the injustice all around him brought him to the other side," his mother, Huda, told AFP, her face girded with a an opaline scarf in front of photos of her armed son.

"The young generation he brought together is not crazy. They are young people who grew up under the occupation, who only know raids and injustice and all this makes them deeply angry," adds his father, Alaa, without wishing to criticize the Palestinian Authority, accused by young Palestinians of impassivity, even of being in cahoots with the Israelis.

"This multiplication of Israeli raids in Jenin and Nablus weakens the Palestinian Authority", he thinks.

Israel says for its part to increase raids in the West Bank to "prevent" new attacks in Israel, Prime Minister Yair Lapid affirming that he "would not hesitate to act wherever the Palestinian Authority does not maintain order".

In an article evoking an "Intifada 3.0", in reference to the Palestinian uprisings of 1987-93 and 2000-2005, the Israeli military commentator Alon Ben David considers that the increase in Israeli raids "erodes the already contested status of the Palestinian Authority". .

"Israeli officials have been saying for years that they must prepare for the day after Abu Mazen (...) But that day has already arrived", he writes in the pages of the daily Maariv in reference to fears of intra-Palestinian conflicts. for the succession of Mahmoud Abbas.

In Nablus, faced with the violence between young Palestinians and local forces, Abu Saada, 67, fears the worst. "Seeing the Palestinians clash breaks my heart. It's not good at all for us Palestinians."