In the Ventoux, harvesting in a cassock for a fair-trade wine

On this territory to the east of Avignon where the first pontifical vineyard was planted by Clement V in the 14th century, they harvest in blue monastic work. 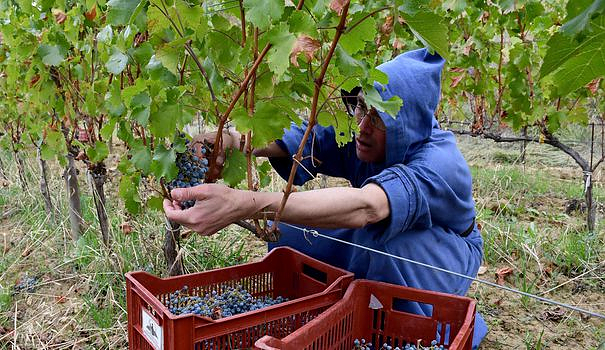 On this territory to the east of Avignon where the first pontifical vineyard was planted by Clement V in the 14th century, they harvest in blue monastic work. Most wear the tonsure, this shaved circle at the top of the head which signifies their renunciation of the material world.

On the "bancaous" (terrace in Provençal) just below, sisters, also Benedictines, pick bunches of Marselan, a grape variety resulting from the crossing of Cabernet Sauvignon and Grenache Noir. Monks and nuns pool their harvests but exchanges are extremely limited

They live in strict "papal enclosure", limiting as much as possible outings outside the monastery. They live in silence if possible but not cut off from the world.

"Following the rule of Saint-Benoît, we seek God through prayer and work. Manual work makes it possible to find the sense of reality", explains the father-abbot of Barroux, superior of this community of about fifty religious, one of the last four to produce wine in France. Neither he nor the other monks will disclose their identity.

These monks cultivate the olive tree, the vine, make bread. Eight times of collective prayer punctuate their days from 3:30 am to "bounce back on prayer continuously". A physically and nervously demanding pace that deters many applicants.

The monk in charge of the vineyard knew as a teenager that his life would be here. His blue eyes sparkle when he talks about his passion for languages: he learned Hebrew and Aramaic on his own. But even more so when he talks about wine, his words interspersed with the grapes he swallows without breathing.

It was he who had the idea for this "Via Caritatis" project launched in 2015. Its objective: to restore the image of the Ventoux appellation by producing with winegrowers a quality wine that allows a move upmarket and therefore a minimum income. Because on these sloping plots located between 350 and 600 meters above sea level, farmers have significant production costs.

Initially, many winegrowers and monks were skeptical, some fearing that it would disrupt their monastic life too much. "It was a big difference, we had to convince the winegrowers of a small cooperative cellar accustomed to selling their wine in bulk that we were capable of making top-of-the-range products, by teaming up with monks who have a very different pace of life," he admits.

Encouraged by the vineyard manager of a famous estate in Châteauneuf-du-Pape, he is convinced that this harsh and mountainous territory can give "a lot of freshness, very fine wines" if the management of the vine and the vinification are improved. . All the more so in the face of global warming which is shaking up many vineyards in the Rhône Valley.

The hectolitre is bought from farmers between 160 and 360 euros against 130/140 euros on average usually in this region.

"We are on the right track, the way of the lord", jokes Régis Bernard. "We had to be in a process of revaluation at all costs" to succeed in maintaining peasant polyculture here, insists this producer of table and wine grapes, as well as cherries in protected geographical indication of the hillsides of Ventoux.

"This project with the monks sets us apart a little from the others. We are in a bad place, with small scattered plots where we need a lot of staff. We had to create added value" in particular to encourage young people to take over, Dominique agrees. Guimety, member of a farming family for five generations.

In the community, the brothers appreciate this time of the harvest which shakes up their very structured daily life. Laughter breaks out in the ranks.

"As we have nothing, we have to relate to beautiful things, to this nature, and to do our job well", confides one of the monks, during a joyful and drunk snack at the middle of the grape crates facing the Dentelles de Montmirail.