In the United States, the death of Elizabeth II marks "the end of an era"

The death, at the age of 96, of this unsinkable monarch, who has seen all the powerful of this world pass by and met 13 American presidents, represents "the end of an era", estimates José Reyes, 37, in the middle of the screens of bustling Times Square, right in the center of New York. 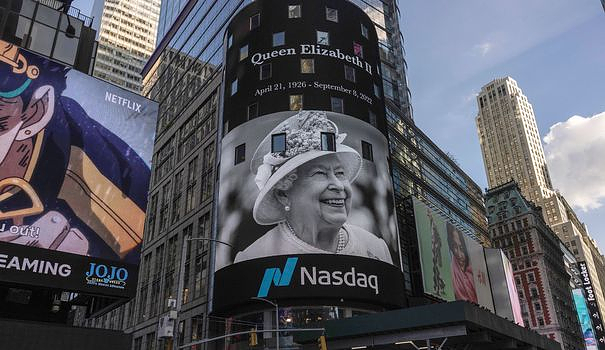 The death, at the age of 96, of this unsinkable monarch, who has seen all the powerful of this world pass by and met 13 American presidents, represents "the end of an era", estimates José Reyes, 37, in the middle of the screens of bustling Times Square, right in the center of New York.

"I think I will remember this day," predicts Jeremy Bourg, a 36-year-old finance worker, the same way "we remember where we were when Princess Diana died."

In the United States as elsewhere, it is time for tributes. A stone's throw from Times Square, the imposing Empire State Building lit up at sunset. It shone in purple, the symbol of the monarchy, and silver, the color of the Queen's 70th anniversary, celebrated last June.

Elizabeth II had also visited the top of the building in 1957, when it was the tallest building in the world.

In Washington, the flags are at half mast on the White House and the Capitol.

And all over the country, President Joe Biden has ordered them not to be raised on public buildings, embassies, military bases and warships, until sunset, the day of the funeral of Elizabeth II, figure of a monarchy from which the United States had departed by declaring its independence in 1776.

The New York Stock Exchange observed a minute of silence on Thursday afternoon. The National Cathedral of the United States, in northwest Washington, rang 96 bells at 5:00 p.m. local time.

And on the famous CNN channel, the presenters were all dressed in black.

Many of these distant cousins ​​in America, however, know little of the queen's story, and especially remember the recent high-profile falling out with her grandson Harry and his wife Meghan Markle, who live now in California.

On the West Coast, it is above all the brand image of the monarch, maintained in all circumstances, which will remain.

"She was an admirable woman, with a real sense of humor. She was always perfect, despite her mobility problems or the arguments in the royal family", estimates Corrine Smith, on the terrace of an English pub in Santa Monica, where dozens of Britons mourn Her Majesty in front of the BBC.

"She will be missed by all of us", continues this 45-year-old American, spectator of the series "The Crown", which has largely contributed to renewing the popularity of Elizabeth II in recent years.

Facing the royal portrait adorned with roses at the entrance to the pub, Gregg Donovan came as a neighbor from Los Angeles to pay tribute to the one who was in the spotlight for 70 years of reign.

"A star is dead," laments this 62-year-old actor and tourist guide, in his top hat and ringmaster costume, bouquet in hand. "I think she should have her star on Hollywood Boulevard. After all, she was the most famous person on earth."

Inside the pub, the queen's subjects in exile are much more affected and seek a comforting shoulder, without taking their eyes off the BBC.

"I don't have many friends who understand what the monarchy means to us," sighs Ramona Braganza, a 60-year-old Canadian expatriate, lonely in front of her burger. "In Canada, every school day we started with God Save the Queen, it's really very hard to explain."

“She was a symbol of the emancipation of women,” says Kerrie Winter, the waitress, between two orders under the flags struck by the Commonwealth coat of arms. For this 36-year-old Briton, Elizabeth II was also "the mother of our people. People considered her a person full of wisdom".

Behind sunglasses that poorly mask his excitement, Paul Floyd still finds it hard to believe.

"It's a very sad moment," says this 38-year-old English producer, who is awaiting his "green card", a sesame granting permanent resident status in the United States. "She was an icon, it really is the end of an era."