In the United States, political violence invites itself in the midterm elections

"I would not be surprised if a senator or an elected official was killed," said Republican Senator Susan Collins in early October in the columns of the New York Times. 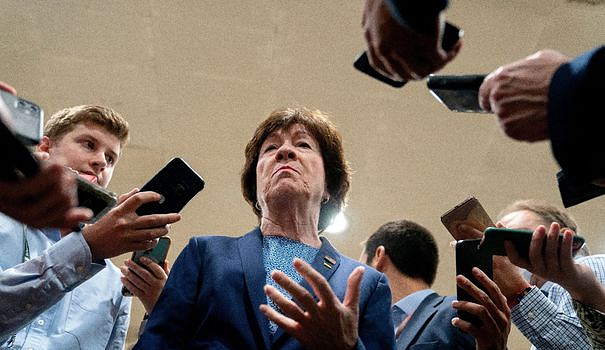 "I would not be surprised if a senator or an elected official was killed," said Republican Senator Susan Collins in early October in the columns of the New York Times.

"What was originally only aggressive phone calls now translates into threats and real violence," said the 69-year-old elected official, after an individual broke a window in her home, in Maine.

Pressures that the elected Republican anti-Trump Adam Kinzinger has also suffered. “The threats of violent acts against the political class have increased sharply in recent years,” he said in July, sharing audio extracts of threats received.

A few days after Mr. Kinzinger spoke, the elected progressive Pramila Jayapal had to dial the emergency number “911” when a man had gone to his home on several occasions, uttering insults with a firearm. the belt.

Republican Liz Cheney, repudiated by her party for having joined a parliamentary commission investigating Donald Trump, had to give up holding any major campaign rally in her state of Wyoming, because of the number of death threats addressed to her.

The country could even experience a shortage of electoral agents during the November legislative elections, as they are threatened, had warned in September Kim Wyman, head of election security for the cybersecurity and infrastructure security agency (CISA).

Acts of violence against American elected officials are not new. In January 2011, Democrat Gabby Giffords was nearly killed after being shot in the head at close range during a meeting with citizens in Tucson.

But many experts agree that their multiplication is directly linked to the arrival of Donald Trump in power in January 2017.

According to the Capitol police, responsible for protecting elected members of Congress, threats against them have more than doubled since the inauguration of the Republican billionaire, going from 3,939 in 2017 to 9,625 in 2021.

“I think we will continue to see an increase in threats against elected officials at all levels, and against electoral officials,” said K. Campbell, security specialist.

He is particularly worried about attacks from far-right groups, including the Oath Keepers. Several members of this militia are currently on trial for sedition, accused of having heavily armed themselves to attack the Capitol in order to keep Donald Trump in power on January 6, 2021.

During this cold winter day, thousands of supporters of the former president had plunged the capital of the United States into chaos, forcing the elected officials to evacuate the hemicycle of the House of Representatives by crawling, gas mask on the head.

But according to political expert Rachel Kleinfeld, the 2020 election season, in which Joe Biden and Donald Trump faced off, was also a "breaking point", leading some Republicans to "accept violence as a political tool".

In the midst of the campaign for the midterm elections, this can be seen in particular in the election advertisements of certain candidates: according to an analysis by the Center for American Progress Action Fund, at least 104 advertising spots aired this year feature a Conservative candidate with a pistol or assault rifle.

In some of them, the Republican candidates have fun aiming for lines from their Democratic opponent, or even President Joe Biden.

"Today, the majority of individuals who commit acts of spontaneous or organized political violence do not officially belong to any radical group", warned Rachel Kleinfeld a few months ago, during a hearing before the American Congress.

"On the contrary, violent beliefs and activities have become commonplace."