In the southern United States, the gas industry is eating away at coastal areas

This project is "much worse than a hurricane", after which, at least, "we can rebuild", judges the one who sees himself as a collateral victim of the development of the American gas industry, which the Russian gas crisis has made paramount. 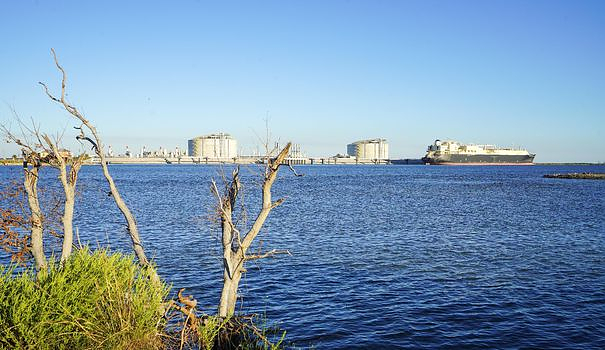 This project is "much worse than a hurricane", after which, at least, "we can rebuild", judges the one who sees himself as a collateral victim of the development of the American gas industry, which the Russian gas crisis has made paramount.

"If it's built, there will be no going back."

In this coastal region between Texas and Louisiana, the recent proliferation of liquefied natural gas (LNG) export terminal projects, huge buildings placed on concrete plateaus that gradually eat away at natural areas, irritates the inhabitants, who consider them too polluting.

The terminal envisaged near Travis Dardar and his wife Nicole would only be a few hundred meters from their home. This would leave them no choice but to pack up - hoping that their land would be bought back at a reasonable price.

Another is planned where they are fishing. The Dardar couple therefore risks having to abandon their shrimp and oyster fishing activity in the area, the ultimate uprooting.

"We don't know what we're going to do next. We know one thing: we can't live here", regrets Travis Dardar.

Last March, a few weeks after the start of the Russian invasion of Ukraine, President Joe Biden pledged to increase LNG deliveries to Europe, which is overly dependent on Russian gas.

44.6 billion cubic meters have already been exported there in 2022, compared to 26 in 2020, reports the Center for LNG, which brings together companies in the sector.

The United States has become the world's largest exporter of LNG, an industry that can only be attracted by the Gulf of Mexico, with its infrastructure and strategic location.

The area alone has 5 of the 7 American export terminals in operation and 22 of the 24 projects submitted to the authorities.

An activity which, in return, brings him "many jobs", promises Charlie Riedl, executive director of the Center for LNG.

According to him, as long as terminal construction projects meet environmental criteria, the government must "authorize them without delay".

But these coasts of Louisiana and Texas are "sacrificed", assures John Allaire, another resident.

"You have the noise, the light, the air pollution and several tens of hectares of concrete swamps" he laments, sitting in his boat, pointing to the new LNG export terminal, very close from is home.

Annoyed, John Allaire observes the waves caused by the huge LNG tankers eroding the coast and the dredged sludge that covers his beach.

He is also worried about the impact on wildlife. The planned project on the land bordering his property is located on a swamp that is home to an endangered bird species, the black rail.

"It's horrible to see this administration (Biden, editor's note) (...) which said that there was a climate emergency, approve these kinds of installations", laments Kelsey Crane, in charge of public policies at the Earthworks association.

Across the Sabine River, the Texas town of Port Arthur already has many petrochemical facilities.

Near the terminal of Cheniere Energy - which last year paid nearly $1.5 million in fines for cracks in its tanks - activist John Beard leads a "toxic tour" of the area, along with environmental associations.

In June, an explosion caused the temporary closure of the LNG terminal in Freeport, further south, reminding residents of the immediate risks posed by this particular neighborhood.

But John Beard, head of the Port Arthur Community Action Network, also denounces the long-term effects on the health of inhabitants largely from minorities.

In Port Arthur, the population is mainly African-American or Hispanic, and a quarter of them live below the poverty line, according to the American census bureau.

In the county, the death rate from cancer is 25% higher than in the rest of the state, according to the Texas Cancer Registry.

John Beard thinks that the industrialists did not choose this zone by chance: "they take the path where there is the least resistance, that of the poor, of those who do not have access to lawyers, who do not have the 'education or knowledge'.