In the south reconquered by Ukraine, stories of terror and destruction

Vyssokopillia, in the north of the Kherson region, is only a few kilometers from the territories controlled by Moscow and which Russia is preparing to annex. 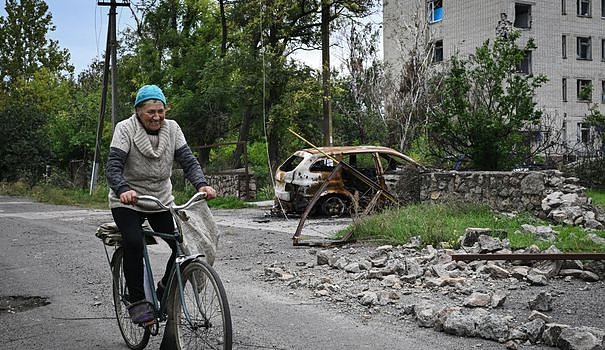 Vyssokopillia, in the north of the Kherson region, is only a few kilometers from the territories controlled by Moscow and which Russia is preparing to annex.

So close to the front line, the small town, previously populated by 4,000 souls and now almost empty, still lives to the rhythm of artillery fire from both sides. Often distant, sometimes very close.

Timidly, the few inhabitants want to revive Vyssokopillia, but they tell of immense suffering under the Russian occupation.

Her head wrapped in a kerchief, her smile exuding kindness, Maria Syjouk, 72 years old for a few days, is nothing but anger in the face of the Russian soldiers, former masters of the place.

"They robbed us, they humiliated us," she storms to AFP journalists, who were able to go to the village, accompanied by the Ukrainian army.

Sometimes they killed civilians, accuses the babushka, who never wanted to leave her house: "There was a family here, the (Russians) wanted to take their car. The husband didn't want to give it to them. They shot him and his wife," she said.

If no mass killings were recorded in the village according to the inhabitants met by AFP, the fate of this couple was reported by three different interlocutors.

It is reminiscent of the summary executions established by many witnesses, despite Russian denials, in many Ukrainian territories, starting with the Boutcha massacre.

Among the five graves dug here since the beginning of the Russian invasion, one of them accommodates two deceased who died on the same day. A wooden cross establishes their death on April 20, 2022.

“A family, a man and a woman, were killed. We were at home when we heard the shots. Then we went to fetch water,” Nina, 65, also recalled, narrating over six months of daily life without going beyond the corner of his street.

"We weren't crying. We were just waiting for our guys to come back, to take over the village," she continues.

The Ukrainian army announced on September 12 that it had recaptured Vyssokopillia, as well as three other localities, during its counter-offensive in the south. She then claimed to have taken over 500 km2.

Since then, communication has been reduced to the strict minimum on this front, when it is freer in the North-East, where at least 8,000 km2 have been regained and troops from kyiv continue to advance.

Asked by AFP, military spokeswoman Natalia Goumeniouk described the maneuvers as "a little different" in the south due to the topography of the terrain.

In the "great plains" of the Kherson region, as opposed to the northeast, there are "very few forests" so military units must "cover long distances in the open" and potentially expose themselves to heavy losses.

And the spokeswoman rejects any "stopping or slowing down" of operations: "We continue to work, but we don't talk about it as openly."

In Vyssokopillia, at least a week of fierce fighting was needed to liberate the village, according to a military communicator who accompanied AFP there on Tuesday.

The destruction is in fact immense for this town. While two destroyed Russian tanks are visible on the outskirts of the town, the facade of the hospital is disfigured by the strikes and the majority of the roofs of the houses are perforated, when the walls are not missing.

The carcasses of cars tagged "Z", a mark of recognition of the Russians, all or almost all good for scrapping, dot the scene. Intact shells appear to have been left near Russian medical equipment.

The enemy presence was "frightening, shocking. We didn't know where to go, what to do, where to hide", recalls Valentina Zgonyk-Safonova. And to tell of "harassed 20-year-old girls", soldiers who got drunk then "screamed", others who "walked with guns in hand and aimed at people".

Afraid of seeing her house looted, when her car had already been stolen, this teacher left Vyssokopillia on June 5. She has just found her building completely burnt out.

Only his green clog bath, moved to his yard, and in which putrescent meat floats, seems to have survived.

"I'm going to come back and rebuild my house," she says. And to add, a little unreal, in the midst of resounding explosions: "I am someone who does not like big changes".