In the second attempt, the christening of the superyacht works

Boris calls, cheers and water fountains: Thousands of fans celebrated the arrival of Vendée Globe hero Boris Herrmann and his team Malizia with their new racing yacht in Hamburg on Tuesday. 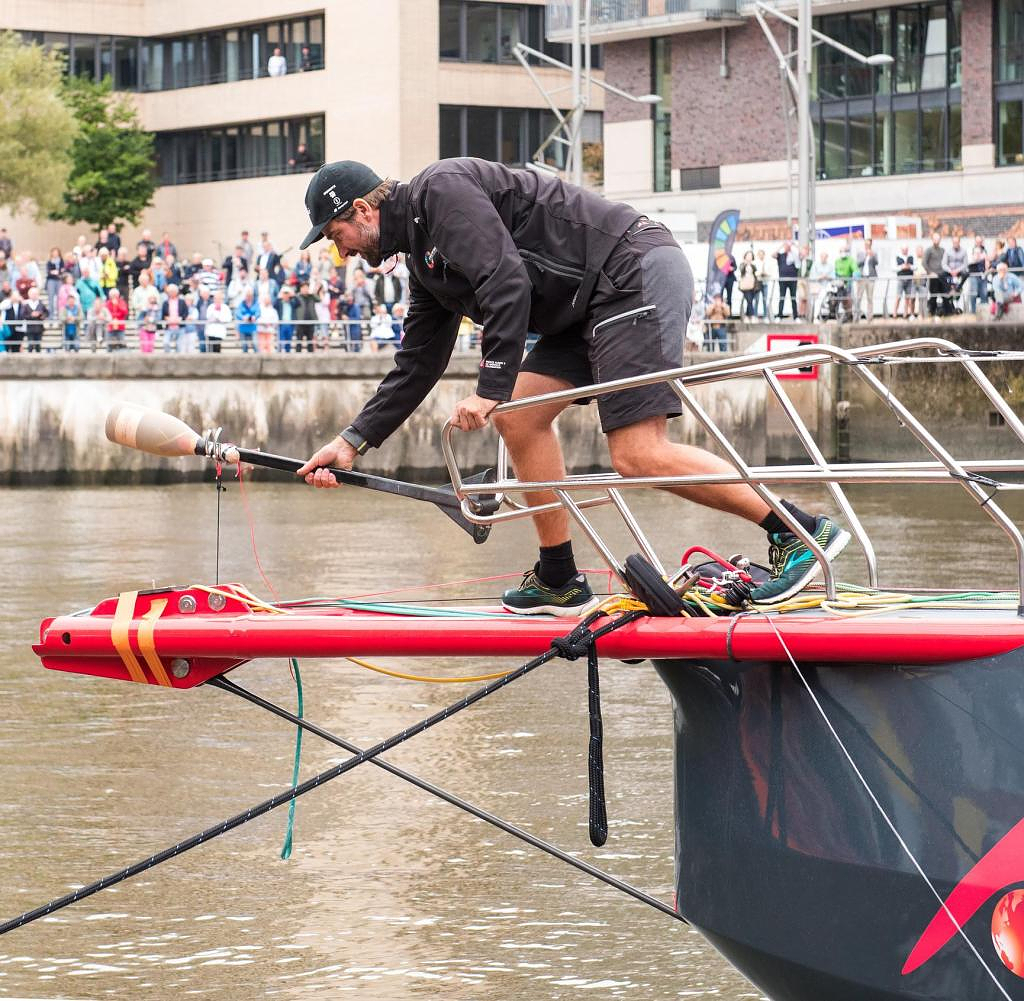 Boris calls, cheers and water fountains: Thousands of fans celebrated the arrival of Vendée Globe hero Boris Herrmann and his team Malizia with their new racing yacht in Hamburg on Tuesday. In the morning, the colourful, 18 meter long boat slowly sailed up the Elbe with a growing accompanying fleet of up to 70 boats on course for the Elbphilharmonie. Ship horns always caused goosebumps. After a four-and-a-half-hour “Elbe Parade”, the colorful yacht pulled into Sandtorhafen to thunderous applause. There the beacon of hope was christened "Malizia - Seaexplorer" by 100 school children.

The children pulled together on the long rope for the baptismal device. The champagne bottle burst on the second attempt on the red bow of the car. The skipper himself had counted down aloud. The children wished the boat "a long life", "lots of adventures" and "that it doesn't sink". Around 60 young fans from Hamburg's sailing clubs had already loudly accompanied the boat on the Elbe with posters and stuffed animals. On that day, they had applied for school leave on their climate mission. The official christening motto was: "Malizia - Seaexplorer - A race we must win." The message about the race that Herrmann wants to win refers to the climate protection mission of the Malizia team and to the sailing challenges.

The four-time circumnavigator said of his regatta rocket with the 29 meter high mast: "This boat is really a beast that wants to chase forward. It's a high-tech prototype with a lot of potential.” After the christening, the 41-year-old skipper and father of a two-year-old daughter spontaneously invited all the local children onto his boat. Malizia sailor Rosalin Kuiper from Holland, who danced across the deck with the children like a fairy godmother in a polonaise, made the next big sporting goal clear: "Of course, my wish is that we win the Ocean Race."

The best-known team race around the world starts on January 15, 2023. Before the team challenge, Herrmann will be taking part in the French regatta Defí Azimut and, from November 6, also in the transatlantic classic Route du Rhum. Hamburg's Sports Senator Andy Grote (SPD) was happy at the happy ceremony "that Hafencity is characterized by sport on this great day". He also went on board the "Malizia - Seaexplorer" as a christening guest and said: "I wish Boris Herrmann and his team that this boat lives a long time and achieves great success."

Herrmann and his team are celebrating their homecoming for two days with the Malizia Ocean Festival in the traditional ship harbor at the foot of the Magellan Terraces. In addition to information stands on sustainable shipping, band performances and maritime art, an autograph session with Boris Herrmann and his wife Birte Herrmann-Lorenzen is also on the agenda on Wednesday. They present their new children's book "My Ocean Challenge - Course on Climate Protection". On Thursday, the Mahatma Gandhi Bridge at the entrance to Sandtorhafen will reopen. Then Boris Herrmann and his beacon of hope say goodbye to the Hanseatic city and set course for Lorient in France again.

‹ ›
Keywords:
TexttospeechHerrmannBorisHafenCity HamburgTaufeSegelsportElbphilharmonieLorientElbeHamburgVendée GlobeKunstMusikBoris HerrmannRoute Du Rhum
Your comment has been forwarded to the administrator for approval.×
Warning! Will constitute a criminal offense, illegal, threatening, offensive, insulting and swearing, derogatory, defamatory, vulgar, pornographic, indecent, personality rights, damaging or similar nature in the nature of all kinds of financial content, legal, criminal and administrative responsibility for the content of the sender member / members are belong.
Related News