In the parish of the Rennes priest accused of raping a minor, the faithful in shock

As the mist begins to disperse on Sunday morning in Montfort-sur-Meu (Ille-et-Vilaine), the parishioners gather in silence, faces closed and eyes reddened, in the church where Father Yannick Poligné officiated. 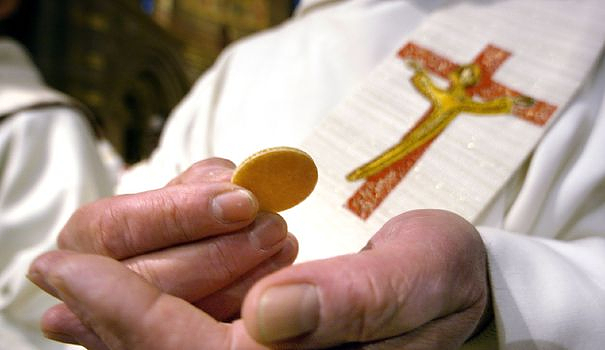 As the mist begins to disperse on Sunday morning in Montfort-sur-Meu (Ille-et-Vilaine), the parishioners gather in silence, faces closed and eyes reddened, in the church where Father Yannick Poligné officiated.

They are rare to agree to respond to the few journalists present. "It hurts me too much", "I don't want to speak, I'm sorry": slip two women interviewed by AFP, in a hurry.

A week after the indictment of the parish priest of Saint-Louis-Marie in Brocéliance for aggravated rape of a 15-year-old teenager, some stop to express the "shock" of the news when the Church is again shaken by sexual violence.

Shortly before the Father Poligné affair broke out, Cardinal Jean-Pierre Ricard recently revealed that when he was parish priest in Marseilles 35 years ago, he had "reprehensible behavior with a 14-year-old girl".

Rape of a minor, with use of narcotics, the priest Poligné knew he was HIV-positive and was undergoing treatment. "There are many aggravating circumstances" recognizes Denise, 68, who thinks that Father Poligné "was sick, that there are injuries".

The 52-year-old priest and the victim had met on a dating app and met in the capital. The facts, disputed by the religious who evoked a consented relationship with a young man whose minority he did not know, occurred in a hotel room.

"Father Poligné's blow is the blow for me", explains Yves, 71, who refused to give his name, like the other parishioners questioned. "He was a very good priest in his way of doing things, he was a good pastor. We all had confidence."

The septuagenarian says he was intrigued once by the priest, whom he saw returning from his jog before entering the church. "He was someone who hid his life well."

The archbishop of Rennes Mgr Pierre d'Ornellas, who reported the facts to Rome as soon as he learned of them, himself led the office of this first Sunday mass since the revelation of the affair. In a serious tone, dressed in purple liturgical vestments, "symbols of penance, expectation and mourning", the prelate immediately evokes the affair which shakes the community.

"You have put your trust in a priest, Father Yannick Poligné (...) Suddenly and brutally, the image you had of this priest is shattered. Your trust has been betrayed (...) Your pain is also My trust has also been betrayed,” Bishop D’Ornellas says, pointing to the believers’ “anger,” “sadness,” and “astonishment.”

"Father Poligné had received his mission from the Church. I, your bishop, in the name of the Church, I ask your forgiveness", he said, before devoting a homily to the victims of abuse by men of the Church. .

"Here, together, both because of our faith in God and because of our awareness of the dignity of every human being, we all feel compelled to fight with determination against this scourge of sexual abuse, in particular that committed on minors who remain injured for life", recalls the Archbishop, who also recalls the "fight" undertaken by Pope Francis against these abuses.

Asked after mass, Denise is soothed by the bishop's message. "I leave full of hope (...) But the Church must evolve, we are no longer in the Middle Ages. Here there are extensive abuses and it is a lifelong trauma for this young person".

What happened "is very difficult. I don't want it to happen again", says Chantal, 81, who describes Father Poligné as "very intelligent". "In the past we trusted teachers, carriers of knowledge. There is a trust that has been betrayed," she says.